Despite covering many genres of photography – from sports to travel to landscape to cats & selfies – I almost always carry a macro lens with me. Why? Because a macro lens offers distinct advantages over non-macros:

Macro lenses are typically more expensive and bigger than their non-macro counterparts, and typically offer smaller apertures – so they can’t compete, for example, in low light scenarios with f/1.4 lenses.

The three macros in this comparison are all relatively light and small. Stacked on top of one another they are barely taller than a single (modern) Nikon 200mm f/4 macro, at the same time they are skinnier and much lighter. All three weigh 740g together compared to the Nikon 200mm’s beefy 1,214g. (See this picture for a comparison.)

This comparison was done on Fuji X cameras, since all three are easily adapted to the format. The adapters used are the Fotasy for Pentax and Kiwi for Nikon.

The Fuji is one of the few modern macros which doesn’t offer 1:1 reproduction, and is the only macro lens in the Fuji X lineup. Fuji’s recently-released extension tubes allow the lens to attain 1:1.3 magnification, but those only allow shooting at close-up distances; natively, the lens focuses from 10.5″ to infinity.

At a mere 229g, the Fuji 60mm is the lightest of the group, despite being the tallest by a tiny amount and slightly ‘fatter’ than the Pentax. Once adding Fuji X adapters the Nikon is 333g and the Pentax 350g. Unlike the two legacy lenses, the Fuji is autofocus, and even using the manual focus is ‘by wire’, which means that it uses the autofocus motor to manually focus.

The Fuji sports the widest aperture at f/2.4, and the longest focal length at 60mm. This allows a much narrower depth-of-field, and also a 1-stop faster shutter speed.

Introduced in 1971, the 50mm S-M-C Macro Takumar is an M42 (also known as Pentax screw mount) 1:2 macro lens. Physically smaller than the other two, it is the heaviest: 243g without any caps, and 350g with the M42-Pentax K & Fotasy Fuji X adapter. Its compactness gives it the impression of being much heavier than the other two despite being only 9 g more than the Nikkor and 23g more than the Fuji.

It is, of course, manual focus and manual aperture only. The focusing, like all the other Takumars of its era, is smooth and precise. For true macro shooting, most photographers prefer manual focusing regardless, and the Pentax is a joy. At f/4, it is the slowest lens of the three and at 50mm has the widest view. When shooting wide open compared to the Fuji 60mm, it requires 1 1/2 stop slower shutter at the same ISO.

Fairly common, the Macro-Takumar 50mm can easily be found for around $100.

Based on the Micro-Nikkor released in 1963, Nikon’s 55mm macro lenses have always been heralded as excellent lenses. While technically shorter than the Fuji, the Nikkor is the ‘fattest’ and feels biggest of the three. After adding a Fuji X adapter, the Nikkor sits well taller than the other two but feels light at 333g.

Like the other two, the Nikkor focuses down to 1:2 magnification, and at 55mm covers 9.5″ to infinity. Like the Pentax, it is fully manual for focus and aperture. I’ve always preferred the Pentax S-M-C Takumar focusing to the similar-era Nikon Nikkors, with the latter feeling lighter and a bit more imprecise. That being said, both the Nikon and Pentax are much better for manual focusing than the Fuji.

Since some modern Nikon cameras are not compatible with the earliest lenses (before 1977, so-called “non-AI”), this generation of Nikkor 55mm f/3.5 macros are easily found for around $100 or even less.

All three lenses, like almost all dedicated macros, have excellent sharpness – especially in the center of the frame. They also have attractive bokeh (out-of-focus blur) in front of and behind the plane of focus.

With all three lenses at f/3.5 or f/4, the sliders below show comparisons between sharpness in the center and background bokeh in crops of the photo below. Note: The crops and full-size links below are unsharpened, straight-out-of-the-camera JPEGs.

Below, comparing center crops from the Pentax Macro-Takumar (photo #1, left) to the Nikon Micro-Nikkor (photo #2, right): 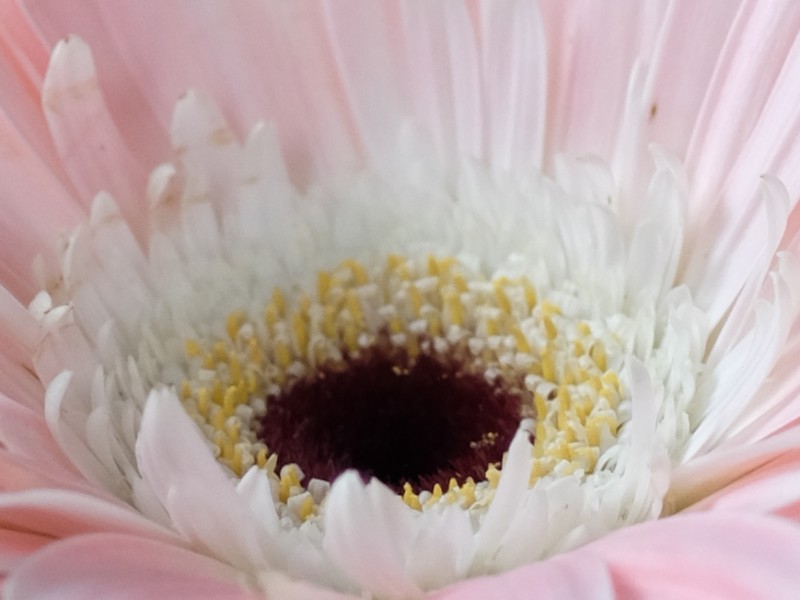 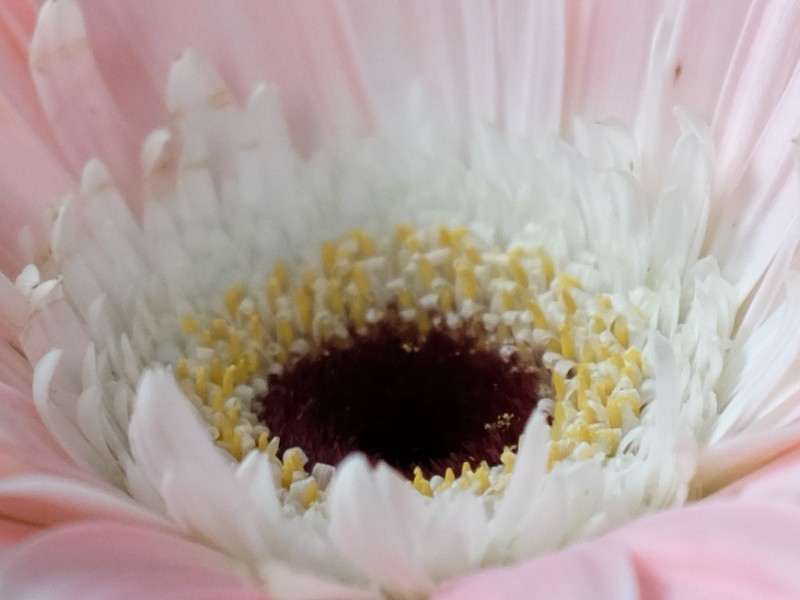 Both look acceptably sharp, both samples above are shot wide open.

Below, comparing center crops from the Nikon Micro-Nikkor (photo #1, left) to the Fuji 60mm (photo #2, right): 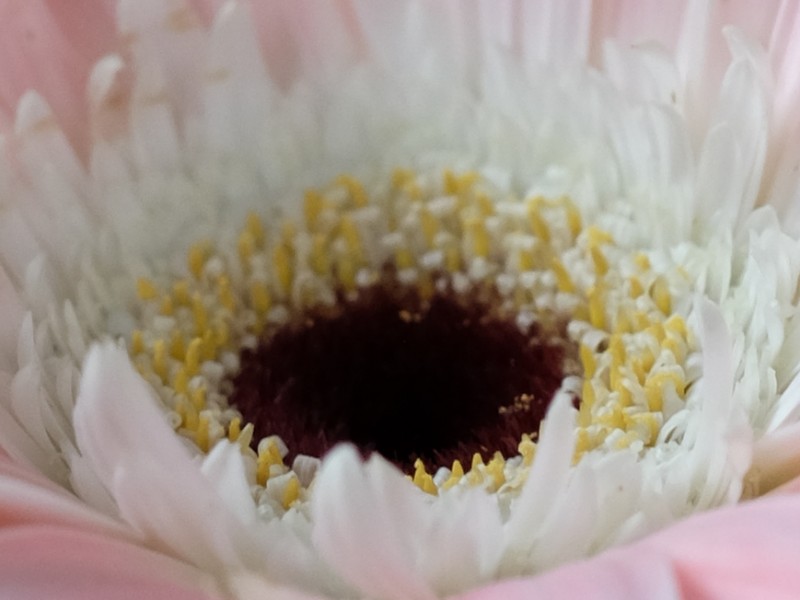 Again, both lenses are acceptably sharp. The Fuji has shallower depth of field at similar apertures because of its longer focal length.

Below, comparing bokeh from the Pentax Macro-Takumar (photo #1, left) to the Fuji 60mm (photo #2, right): 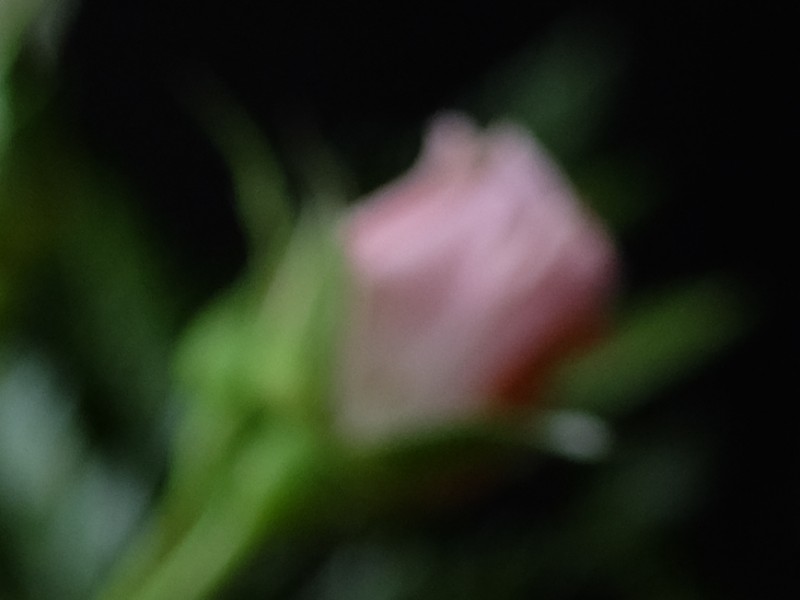 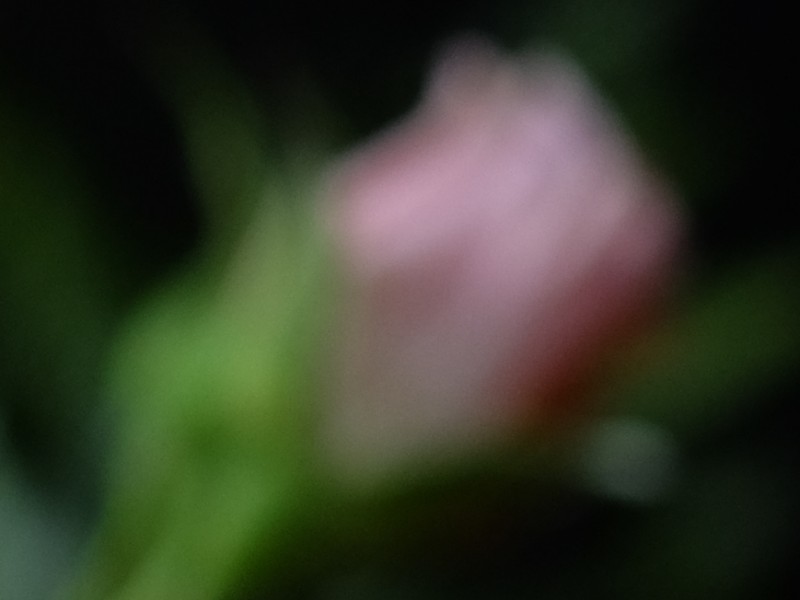 The Fuji’s longer focal length is obvious, as is the shallower depth of field when taken from the same distance. Since both lenses are 1:2 magnification, however, the Macro-Takumar can focus closer to simulate the same effect as the Fuji.

The Fuji has subtly smoother out-of-focus, both are perfectly acceptable. 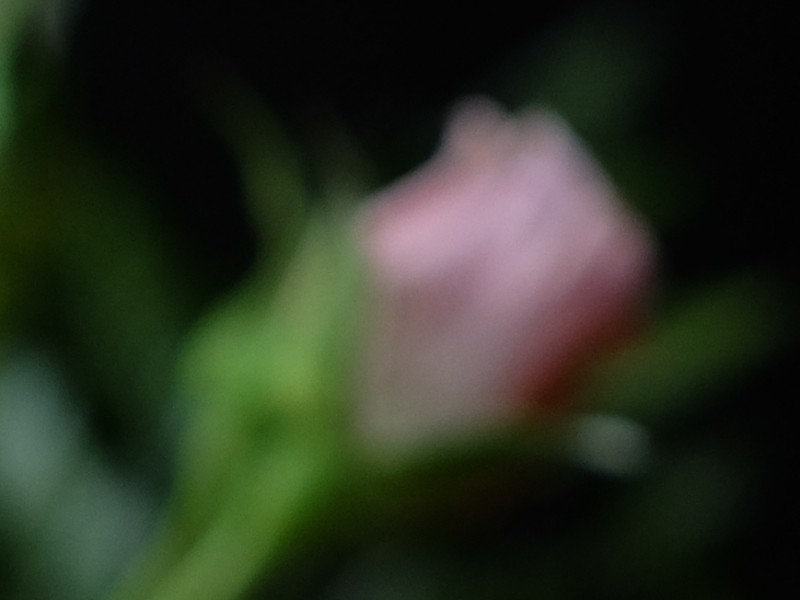 The Micro-Nikkor is just about the equal of the Fuji, with excellent out-of-focus rendering.

All three have a small bit of longitudinal chromatic aberration (“LoCA”), which in the out-of-focus blur introduces slight red/magenta in front of and slight green/cyan behind the plane of focus. In almost all of my “real world” shooting, none of these lenses produced LoCA in a noticeable way.

Of these three macro lenses, clearly the Fuji Fujinon 1:2.4 60mm is better than the other two. It offers at least one f-stop advantage, is the lightest, and on Fuji X cameras is smallest, all while offering auto focus and aperture. The Fuji is sharp and has pleasant out-of-focus blur. Combining the two, the Fuji can produce a lovely “3-D” effect, like in the mushroom sample above.

The Fuji has a small amount of longitudinal chromatic aberration and (like most of my other Fuji primes) does not create sharp starbursts e.g. when shooting into the sun here or for night shots.

The Fuji is, of course, much more expensive than both the Pentax and Nikon combined, even when buying used, and it’s focus-by-wire is substandard for manual focusing.

For its intended purpose – as a compact, 1:2 magnification macro lens – the Fuji is outstanding. Adding one of Fuji’s new extension tubes extends the 60mm macro’s reproduction to 1:1.3, while maintaining auto focus and aperture. No surprise, the lens is a clear winner.

For those using a non-Nikon system, I see the Pentax Macro-Takumar having a very slight edge over the Micro-Nikkor. All three lenses have traces of LoCA, although the Pentax may have a tiny bit less than the Nikkor. The Nikkor weighs less, but is physically bigger. Both are far superior to the Fuji for manual focusing, with a subjective edge in the excellent tactile response from the Pentax.

The Macro-Takumar has the smallest wide-open aperture at f/4, which can be limiting compared to the Fuji, especially when taking non-macro shots.

If you shoot a Nikon (which can take non-AI lenses) then the Micro-Nikkor is a better choice than the Pentax. The Nikon is a bit faster than the Macro-Takumar at widest aperture, and both are sharp and excellent for manual focusing.

The Micro-Nikkor also has excellent out-of-focus rendering, on par with the Fuji and slightly smoother than the Pentax. All three are excellent in this regard.

For the nostalgic, 40+ year old lenses competing with an excellent modern one speaks volumes for their overall value. The Macro-Takumar and Micro-Nikkor can easily last another 40+ years with the same result.

While the Pentax and Nikon are simply excellent, the Fuji’s faster aperture and modern amenities make it an easy choice. However, in this comparison, all three lenses are winners.

Back to: Introduction || Descriptions & Samples || Comparisons