Some thoughts on cameras and my hiking setup.

For some recommendations on cameras which I don’t necessarily own (written by me in 2014 and I think still relevant) see Top 10 Hiking Cameras for Photographers. Obviously there are newer models to each of those highlighted.

Mirrorless cameras have a size (volume) and weight advantage over a typical SLR. Additionally, the smaller sensor size in APS-C cameras (see here) allows for smaller lenses in some cases.

My strong preference is for Fuji mirrorless cameras. Because I use Lightroom (which has a difficult time with Fuji’s X-Trans sensor array) I mainly use the X-A1. Fuji is releasing both the X-A3 with higher resolution and an X-A10 at a low cost.

My first mirrorless was the Sony a600. I found the user interface counter-intuitive and use it rarely.

My main DSLR is a Pentax, mainly because their lenses are small and light. Unlike Nikon, Pentax focused fully on APS-C and so designed lenses taking advantage of the smaller image circle. However, as the photos clearly show the addition of a mirror necessarily makes the camera body itself bigger and heavier. 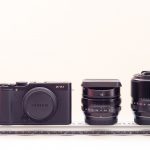 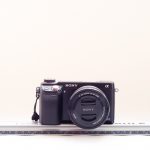 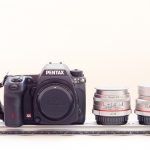 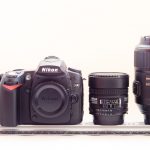 I prefer prime (fixed focal length) lenses primarily because they are sharper and have better image rendering than most zooms. The kits above show the difference between a mirror and not.

I will sometimes carry just the Fuji X-A1 + 18mm lens, which weighs exactly the same as the Sony a600 + zoom at 466 grams. If I am doing a light hike I will carry the Pentax with the 15mm wide angle and 70mm telephoto. I stopped carrying my Nikons at all, although the comparison above is somewhat unfair because the lenses in my Nikon kit cover a ‘full frame’ sensor. There are smaller/lighter options for the Nikon, but still heavier than the Pentax.

I modified my left waist band on my EMS pack to carry any of the Fuji, Sony, or Pentax cameras. (The Pentax fits only barely.) I threaded a strap with snap-clips through the waist belt on my pack, and attached the reverse clips onto a small camera bag. This way I can quickly remove it from my waist pack if it rains.

On the right waist of my pack I threaded a smaller strap with two strong snaps on it. I can either put a small lens pouch or another small camera bag on this side. Again, two snaps and the bag is released (but likely impossible to do accidentally) and out of the elements. 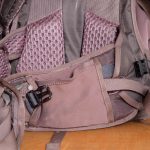 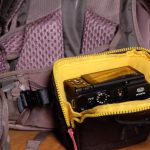 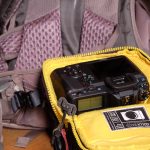 Pentax in the small bag (barely) 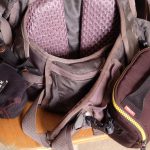 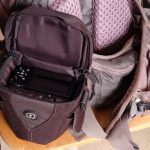 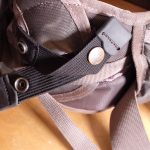