This summer, I decided to join Ben in undertaking a reading list. Nine books (going on ten) is a longer list than I set out to read; however, a few long train rides for business and pleasure made a big difference. The books, and a short summary are listed below in order from most to least favorite. It was too difficult to rank the fiction books, so here I only listed the non-fiction ones.

[This isn’t really a photo post, so I took a shot of some of the completed stack of books for cohesion with the rest of the blog.] 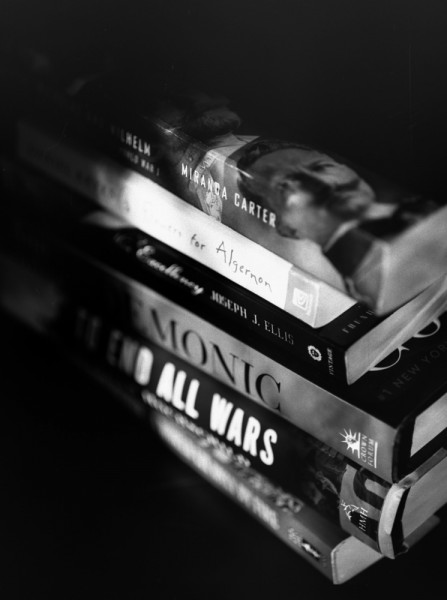 1) (Favorite) George, Nicholas, and Wilhelm, by Miranda Carter. King George V of England, Czar Nicholas II of Russia, and Kaiser Wilhelm II of Germany were all first cousins, with Queen Victoria as their grandmother. The book painted European history from the late 1800s until 1914 through portraits of these three, who led the world into World War I. Essentially it is a triple-biography, told with a refreshing and challenging narrative and through the timeline of history rather than individuals.

2) House to House, by David Bellavia. The graphic memoir of the Battle of Fallujah is the moving story of this generation’s soldiers that Hollywood should have made.

4) His Excellency, by Joseph Ellis. This short biography of George Washington is a must-read for those who want to understand why Washington’s decisions led as much to the United States of America as did any other Founding Father. It also refutes the claims (starting with Jefferson) that Washington was not intelligent, or not aware of what was happening around him. (Note: Joseph Ellis also wrote a critical biography of Thomas Jefferson, American Sphinx, which I enjoyed.)

5) Demonic, by Ann Coulter. I bought this book in an airport after finishing another book early, and mainly for the excellent but too short second part of the book about the French Revolution. It was typical Ann, the only male in the Republican party, but for those who read her articles weekly there was some re-hashing of previous thoughts. Her thesis did thoroughly explain the riots and flash mobs throughout the UK and US.

6) The Age of Napoleon, by J. Christopher Herold. This book alternated between thrilling and painfully boring. At its most thrilling, as during the description of Napoleon’s rise and the results of his reign, the book was supremely balanced. After 20 pages discussing the poets of the early 19th century, however, I was ready to throw it out. Ultimately I was doubly rewarded by reading this book back-to-back with His Excellency, which together paint a picture of what Washington — or Bonaparte — could have been.

7) To End All Wars, by Adam Hochschild. Having first read George, Nicholas, and Wilhelm, I agree with the central thesis of Hochschild’s book that World War I was avoidable and tragic. However, his book was mostly about the peace movement that broke out in the UK, and it was only mildly interesting throughout.

8) (Least favorite) A World Lit Only By Fire, by William Manchester. I never read a book’s introduction prior to reading the book. My suspicions in reading Manchester’s book that the middle ages weren’t as backwards nor the papacy as debased as depicted were somewhat confirmed when I finished the book and read the introduction. “It is, after all, a slight work, with no scholarly pretensions.” Ultimately I took away that it was utterly anti-Catholic and not much more. My only praise is reserved for the third portion of the book, on Magellan’s circumnavigation of the globe.