The Santanoni range has three high peaks: 4,606-foot Santanoni Peak, 4,442-foot Panther Peak, and 3,793-foot Couchsachraga Peak. Couchsachraga, which translates as “dismal wilderness”, is one of three peaks originally thought to be over 4,000 feet, which is why it is on the 46er list.

On the road before 5 AM, we signed in at the trailhead at 6:48 AM and started down a wide and smooth access road before turning onto the trail to Bradley Pond 1.8 miles later. Thanks to the hard work of the 46ers building bridges over the muddiest portions of this trail, it was a pleasant walk through the woods and we reached the cutoff for the Santanoni Express trail at 8:10 AM.

Just prior to the cutoff, we ran into two gentlemen who seemed doubtful of our day’s agenda. After hearing that we were doing all three peaks and heading back to the car, they spun a tale of misery from doing the same peaks the previous day and camping out. They proceeded to ask us if we had headlamps (assuming we would be hiking past 7 PM) and if we were prepared to spend the night, and told us how terrible the slough to Couchsachraga was.

Through others’ trip reports and published materials, I had thoroughly researched our hike prior to coming up. Based on our previous long/difficult hikes and comparing times, and because others have hiked the same path in 10-15 hours, I estimated that we could do these in 11-12 hours at most. There is nearly 5,000 vertical feet over the roughly 15.5 miles, but this isn’t extraordinary for Adirondack hikes.

After we continued on, I stopped Kathy and reassured her with some great advice I read this summer: “It is a mistake to allow people, who have never met me, who don’t know my skill level, influence my decisions pertaining to certain elements on a hike.”

Turning on to the newly re-opened Express trail (which was the maintained trail prior to being closed decades ago, hence sometimes referred to as the “Old Trail” or the “New Trail”, or even the “Old/New Trail”) we stepped easily across the Santanoni Brook and started up the very nice and soft path directly up to Santanoni. I should have heeded the advice above with my expectations for this trail, as it was notorious for being steep and difficult. Kathy and I found it to be neither, in fact we both thought is was as nice as the Slide Brook or Lillian Brook trails from the Dix range: mostly soft underfoot, cut out in all the right places, and only steep enough to get you where you needed to go.

The Express trail terminates at a junction about 0.2 miles from the peak, where we caught up with another group and correctly assured them to turn left to get to Santanoni. By 9:30 AM, we were enjoying the summit of our 33rd mountain, a clouded-in Santanoni Peak.

As the 14th-highest peak, I knew that we would have to make our way down from 4,600 feet to a low of about 3,500 feet on our way to Couchsachraga, about 3 miles away. I wasn’t disappointed in my expectations, as it was steeply downhill from Santanoni until we took a lunch break at a lookout no more than 10 yards from the junction referred to as Times Square which leads to Couchsachraga and Panther. While enjoying our lunch the clouds started to lift, and while we still couldn’t see Santanoni, we could start to see Couchsachraga due west from us.

The trail to Couchsachraga is known for being sloppy, with the low point in the col being a swamp. It turns out that we picked an excellent time to go, as many of the places where footprints sunk a foot deep had hardened and we sailed right over them. There was also enough debris laid down across the swamp that we navigated straight through it, not even really needed hiking poles.

The hike to Couchsachraga was more a mental challenge than a physical one, primarily because of how far down you go to get there, always assuming that the brief uphills are the summit itself. Reaching the summit (our 34th) at noon, we turned almost immediately back towards Times Square and were rewarded on the way with a beautiful view northward to the Seward Range.

After chatting briefly with another group at Times Square, we set off for Panther Peak. The clouds had completely lifted, but not abnormally for these summits there were strong gusts of wind that picked up throughout the day. We popped out on Panther’s summit in what seemed like no time at all, since it is well under a half mile from Times Square. The summit was beautiful, with sweeping panoramic views on the ledge just prior.

We summited a windy Panther Peak (our 35th) at 1:45 PM, just under 7 hours from the start of the hike. I knew at that point that we would finish with plenty of daylight and that the warnings from the gentlemen earlier did not pertain to us, underscoring the great advice above.

The trail down followed Panther Brook towards Bradley Pond, and for the majority of the time was steep boulder-hopping. Compared to the lovely Express trail up, and with knees aching from the descent to Couchsachraga, this portion was (to put it nicely) miserable. The trail turned hard left and back up to skirt to the north of Bradley Pond, which I cursed for staying so far away.

Just above Bradley Pond, we ran into a gentleman who had missed the cairn for the Express trail and was making his way up. It was 3:35 PM; he calmly let us know that he was hoping to be back at the car by midnight. Mindful of the “advice” we received earlier in the day, we told him how far he was from the top and simply told him “good luck!”

We finally found our way back to the blue trail and headed back out towards the road. Again thankful for the excellent bridges build by the 46ers this summer, we made it back to the register at 5:46, exactly 10 hours and 58 minutes round trip. Our headlights turned out to be dead weight, as we had at least an hour to spare. Importantly, we enjoyed three more summits and re-confirmed our abilities, convincing us again that with a positive mental approach we can do – and enjoy – anything. 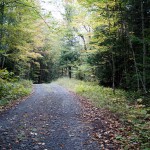 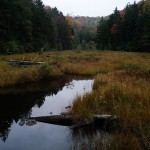 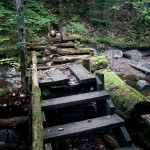 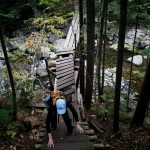 We rock-hopped around this bridge 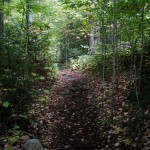 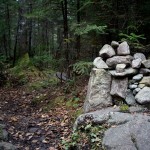 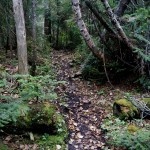 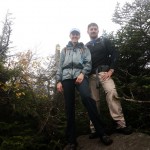 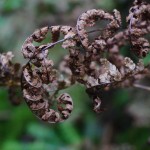 Fern getting ready for Autumn 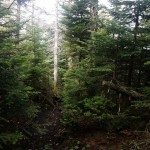 Trail on the way to Couchsachraga 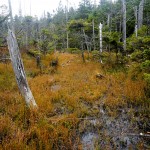 The swamp on the way to Couchsachraga 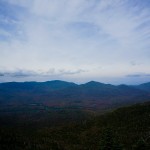 Lovely view of the Seward Range 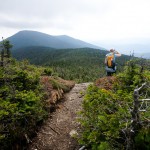 Heading down Panther Peak, Santanoni in the background 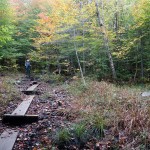 46er Maintanence on the way to Bradley Pond