It had been over two years since Kathy and I first hiked these three peaks, a trip which at the time proved to be physically taxing. That hike was on the final day of summer in 2013, and the summits of Santanoni and Couchsachraga were completely clouded in; by the time the skies opened on Panther Peak, I was exhausted.

Fast forward to the first day of winter this year, and I chose the same route as last time: I would ascend via the “Express” trail directly to Santanoni Peak, then descend all the way to Couchsachraga, and hit Panther Peak on the way out via Bradley Pond. Looping this way makes the total hike about 15 miles with 5,000 vertical feet of climbing.

This time I was the second car in the parking lot, but the first person on the trail at 7:45 AM. It was 25 degrees (F) at the start with eerily calm winds. The first three or so miles until the turn-off for the Express trail had a silent solemnity to them, punctuated occasionally by the roaring Santanoni Brook.

Turning up the Express trail there was only one set of descending footprints in the weekend’s snow. I donned my Hillsound Trail Crampons about a third of the way up, and would keep them on for the next six hours.

After making the scenic ascent up the Express trail, I was rewarded with the views that we missed in 2013. As the highest peak in the Western High Peaks Zone, Santanoni Peak provides sweeping vistas of the other High Peaks sitting to the east and north. I watched a lenticular cloud form above Algonquin, which sits next to the gouge of Wallface Mountain. Looking north I could clearly see Panther and Couchsachraga Peaks, seemingly closer than they really are.

The descent from Santanoni Peak to the junction with the others (dubbed “Times Square”) is steady but not steep, but the descent to Couchsachraga is relentless. Sitting well below 4,000′ and in fact only the 60th highest peak in the Adirondacks, Couchsachraga has a Napoleon Complex: It has a long, steady descent from Times Square punctuated by several false summits. It is the only High Peak which you have to climb to get off of!

I still felt strong on the return to Times Square, and the ascent to Panther Peak is incredibly short in comparison. The winds started up in earnest on Panther, first killing my camera battery and seconds later sapping my phone too. While I had planned to stop for some photos of Santanoni Brook on the way, the cold was having none of it.

I returned to my car at 4:45 PM, exactly 9 hours from the start, just as the twilight faded. It was an idyllic start to the winter hiking season. 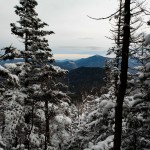 View back of Algonquin and Wallface from the Santanoni Express trail. 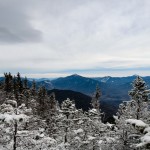 Wallface, Algonquin, and Colden from Santanoni 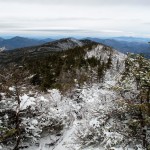 View of Panther from Santanoni 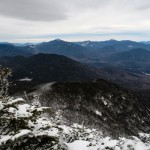 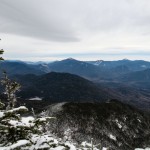 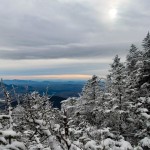 View of the southern Adirondacks from Santanoni 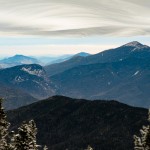 Lenticular clouds form above Algonquin Peak, as seen from Santanoni. 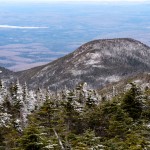 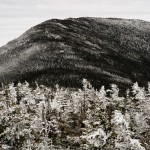 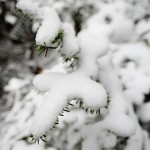 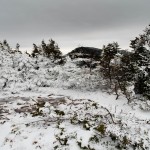 Wind-swept summit of Panther Peak, looking back towards Santanoni Peak