That’s the day that God made for me in the Adirondacks for this hike. Crisp but not too cold, sunny and not a cloud in the sky.

This was my third time up Colvin, Blake, and Nippletop, and my fourth visit to Dial. Never had I done all four together, so I was looking to stretch my comfort level with this nearly 20-mile hike.

The approach to these summits through the private Adirondack Mountain Reserve was along a frozen-in-ice Lake Road. I donned my trusty Hillsound Trail Crampons for the walk to the Gill Brook bypass, where I passed another couple heading to Colvin & Blake. The walk from the bypass to the junction with Elk Pass was hard-packed snow with little ice.

I changed into snowshoes just past the Elk Pass junction, and with the exception of a couple short pitches of ice there was a decent amount of snow all the way to Mount Colvin.

In the summer with the foliage, Colvin keeps its views until the very end. After the leaves fall, there are more views towards Nippletop and eastward along the way. Those views were spectacular in the early morning sun; at the summit, the views were even more breathtaking. The Great Range unfolds over the Ausable Lakes to the west, and the warm sunshine made the snow-capped Upper Great Range particularly handsome.

The trip from Colvin to Blake Peak (which is one of the three peaks less than 4,000′, but still included in the 46er list for historical consistency) is a quick down-and-up, typically maligned because of the return trip necessitating the reverse down-and-up to backtrack to Colvin. On this day, the hike up to Blake was all soft snow and no ice, perfect for snowshoes the whole way. Blake isn’t known for its views, but the snowfall and lovely morning light even made this lowly peak a dream.

After a couple snaps at Colvin again, I headed back to Elk Pass and up to Nippletop. The ascent is steep and seems longer than its 1.9 miles to the summit, with the glorious views from Nippletop’s ridge worth the ascent. There were several feet of snow on Nippletop’s ridge (actually, all the way to Dial Mountain) so the trail sat higher than normal and the views were even more impressive than in summer.

The hike from Nippletop to Dial was smooth sailing, with a wonderful snowshoe track the whole way. I knew I was in for a bunch of ups-and-downs, as the Leach trail summits Dial, then Bear Den, then a shoulder of Noonmark before it descends back to Lake Road.

The final stretch of the descent from Noonmark’s shoulder to Lake Road turned ugly, with wide ice flows and frozen ground for half of the descent, hard to follow the right track and hard on the knees. I still felt good, despite being 15 miles in, and made good time back to the gate. I signed out just over 9 hours after signing in, still feeling good and marveling at the beautiful snow-capped Adirondacks. After passing the duo back on Colvin, I had the entire hike to myself; just me, blue skies, and snow-capped mountains. 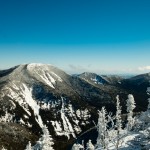 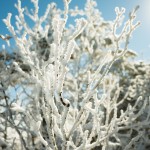 Snow- and ice-covered branches on Nippletop 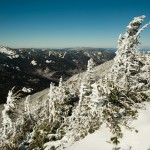 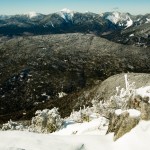 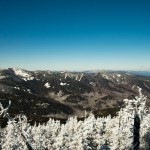 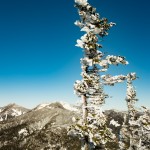 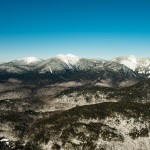 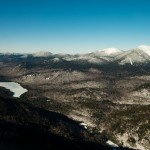 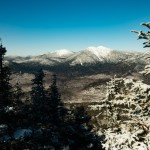 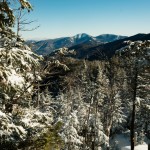