We had planned for the past six months for a trip up to end winter. Since then, temperatures have fluctuated somewhere between early spring and early summer. I was getting worried that Kathy’s first winter peak would be warmer than when we did Marshall in August!

Who would have guessed that the warm spell would snap just 24 hours before our arrival, along with a dusting of beautiful snow?

We decided to change up our routine, and ate breakfast in Keene Valley just before starting the hike. It was a relaxing 9AM while it was a crisp 20°F the sun warmed any piece of dark clothing.

We donned our Hillsound Trail Crampons just before the First Brother, an open rocky pre-summit with great views. We would keep them on until about the same place on the return, with most of the trail ice and hard-packed snow. The final 0.3 miles is a steep push up to the final summit, with a few spots of harder ice.

The summit was glorious — brilliant sunshine, no wind, and panoramic views. We stayed a half hour but could have spent all afternoon. What a glorious summit for Kathy’s first winter 46!

The sun melted almost everything on open rock by the time we returned, and nearer the Garden it was muddy and felt like spring. Luckily, it looks like winter will stay for a couple more days. 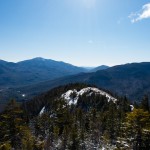 Looking back toward Giant Mountain 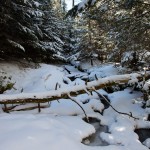 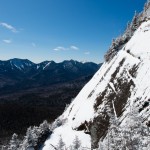 Big Slide’s big slide, with the upper Great Range in the background. 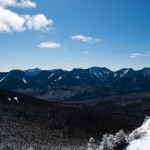 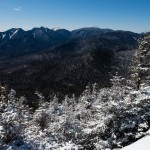 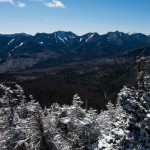 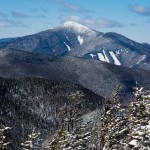 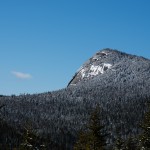 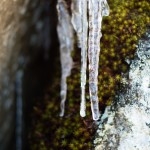 Warming icicle on the descent from Big Slide