I’ve done these five in a single day before, in the summer from Elk Lake. It was a fantastic day to hike and a great introduction to the 5 peaks in the range.

Ever since, I’ve wanted to do a traverse using the Boquet River/Round Pond instead of Elk Lake. Since the summer gate is closed at the latter, I convinced hiking legend Joe Bogardus (aka Joe Cedar, because “cedars get stronger with age”) to spot a car and hike the former.

We started from Round Pond, expecting to get wet both from rain/melting snow and sweat — it was a balmy 32°F at 6:20 AM. The snow was in better shape than during my climb of Marcy/Skylight/Gray the day before, so we made it the first 4 miles in microspikes without snow clinging to everything. A bit farther on, we turned up.

Up, and up. This trail to Dix Mountain is the steepest approach of at least a mile to any Adirondack summit. There is even a leveling off near the top, meaning that the middle is just straight up.

Here I wasn’t sure what would happen. I was with a strong, fast hiker, on my fifth consecutive hiking day. I didn’t want to hold him back, but at the same time knew that we had a lot of climbing ahead of us, so I just kept my pace. It wasn’t too different from Joe’s, who near the top stopped to tell me, “you passed.” Talk about high praise!

The wind was whipping on 4,857-foot Dix Mountain, so I snapped the only pictures of the day and we sped off. I led down and up to Hough, the portion I messed up solo, so it felt good to exorcise that demon.

Joe led the rest of the day, and his motor just kept running. His fleet footing made it hard for me to keep up descending, but not enough to get too far separated, and we would ascend together. We climbed to Macomb first, then snacked on South Dix, then finally Grace.

After Grace, we descended a tricky and sometimes sketchy herd path that hooked up with the South and North forks of the Boquet River. Joe kindly showed me which river crossings collapse, so my boots stayed dry. I doubt I would have cared since it was 60°F by this point. I was baking.

We made it back to the car, 15.6 miles/5,600 vertical feet and 9.5 hours later. Joe was great to hike with, just as I’d assumed, the route was as interesting as I’d imagined, and I did better than both he and I expected. For five consecutive days of hiking, accumulating 87 miles and 27,000 vertical feet, I couldn’t have asked for a better day. 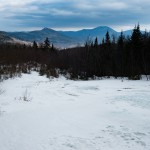 At the base of the slide, looking back on Noonmark & Giant 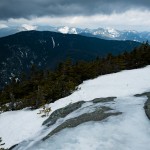 The Great Range and Nippletop from Dix 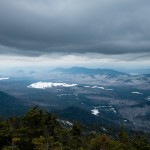 Looking over a frozen Elk Lake