After my exhilarating winter, I wanted to keep up the physical gains I made, particularly from March. Hiking is really the best training for hiking, the longer and steeper the better. Life has a way of interfering with the best laid plans, and four weeks zipped by since my last serious hike.

The Catskills seemed like a good option for distance and vertical, and additionally there are two over-4,000′ peaks which are part of the New England “115” peaks. (The 46 Adirondack peaks are part of that list, too, along with 48 in the White Mountains, 14 peaks in Maine and 5 in Vermont.) I chose to start with Slide Mountain, the highest point in the Catskills and an easy climb.

4,180-foot Slide Mountain was even easier than I expected, with no real steep parts thanks in part to the starting trailhead already at a 2,400 feet. I made the 2.1-mile summit in about an hour.

Continuing over the summit was much more interesting, with several very steep pitches and a loss of over 900 vertical feet in 0.9 miles. The rocks here were interesting with obvious layering worn down by wind and weather, reminding me more of Pennsylvania than the Adirondacks. The ascent to Cornell was relatively easy, taking me a little over an hour to cover the 2.3 miles between it and Slide Mountain. There views are mostly obscured, so after scuttling someone’s illegal fire pit I headed on.

The descent towards Wittenberg includes a drop through a steep and exposed “v” named the Cornell Crack. I lowered my pack first and descended without incident, thankful that it wasn’t covered in ice. About 40 minutes later I made the summit of Wittenberg, with a rock ledge overlooking the Ashokan Reservoir. I set up the tripod for some self-portraits and continued on, intending to make a loop hike.

At this point, I was only 3 hours and 5.2 miles into the hike with plenty of energy and time left in the day. The descent off Whittenberg was decent with some steep pitches, taking me about 45 minutes to cover the 1.3 miles to the Woodland Valley campground. There was a little climbing and much more descending than I expected over the next 2.6 miles to the campground, which took a little over an hour, getting to the low point in the hike at 1,350 feet above sea level.

This would be a real ‘low point’ too; I missed the connecting trail across the street and walked about 3/4 of a mile down the road before I got out the map and realized my error. Ugh. In my defense, the campground is closed for the winter and I angled out towards the main entry, instead of walking straight through to the parking area on the other side. The good part is that mental resilience is as important in hiking as is physical, and this unnecessary 1.5-mile road walk and 25-minute time waste was good for the former.

There was also a little dread in that my road walk showed the steep ridge that I would have to traverse to make my loop. It was worse than I thought (again, consulting a map more studiously would have helped here) as the trail consistently ascends 450 feet then drops half that amount down a gorgeous stone staircase. It then climbs steadily another 750 feet to a spring, where I stopped to rinse my hands and face.

Because I started at noon, it was 6:30 PM by the time I got to the junction with Giant Ledge/Panther Mountain, which was still 2.75 miles from the car. It was 3/4 mile down to the Giant Ledge parking area then a trudging 2-mile road walk, up 500 and down 200 vertical feet.

My first Castkills hike was great — the trails were immaculate (highlighted by the amazing stone steps between Woodland Valley and Giant Ledge), the loop was harder than I expected, and the weather was beautiful. Unfortunately the hills aren’t their most picturesque at the moment, somewhat dead looking without a wintry covering or a spring one, so the pictures are sparse. I’ll go back another time. 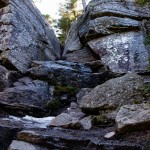 The “Cornell Crack”, a steep drop between Cornell and Whittenberg Mts. 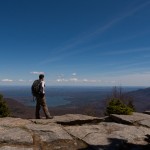 Looking over the Ashokan Reservoir from Whittenberg 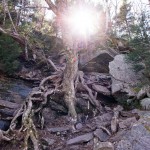 A section of the Long Path descending Whittenberg