Last year over Memorial Day weekend, when we came up to Lake Placid to accept our official 46er certificates, it snowed. This year, we’d have given our left arms for it to cool down to 70°. It may have topped 90°, and if it didn’t, it sure felt it.

As a friend of mine says, “you don’t have to be having fun for it to be fun.”

The Elk Lake parking lot was full by 7:40AM, so when we arrived an hour later I dropped my two terrific hiking partners at the trailhead and parked back at Clear Pond, 1.9 miles away. Wanting to catch up as quickly as possible, I did the unthinkable: I jogged the 1.9 miles back to the lot.

Along the way, I picked up Matt from Albany, who had the same itinerary as us and seemed happy to have company. I made him double-step it to catch up with Kathy & Kayla, who were waiting for us at Slide Brook.

Kayla paced us on our first ascent of the day, and she set a steady, quick pace up to the base of the Macomb Slide. Here we got lucky: The sun ducked behind the clouds just as we moved out into the open. It was hot, but definitely could have been worse. We made quick time up the slide, and we commented on how much Gavin would like this part of the hike, with the long open slab. (We would say the same about the ascent of South Dix, and again at the summit of Grace.)

Even with the cloud cover, it was hot. There was zero breeze, and while it wasn’t humid compared to Philadelphia in July the still air definitely made it harder than usual.

After a snack on Macomb, we made good time over to South Dix, where we thankfully had a soft breeze on an open slab near the summit. Kayla and I sped over to Grace, with Kathy and Matt in tow.

The black flies weren’t biting (too much, anyway) but they seemed to enjoy swarming anything which wasn’t moving, so our time on Grace was cut short. We returned to South Dix, and after realizing that we drank almost all our water decided to descend Lillian Brook. Even though Hough wasn’t that far away, it was one of the hotter days in the Adirondacks, even in August! Hough could wait for a cooler day.

The descent of Lillian Brook starts rough, but smooths out and becomes one of the nicest trails in the park. We stopped to dip our heads in the brook, which felt absolutely fantastic! Hard to believe that exactly 12 months prior Kathy & I were sliding on ice up to Phelps! At least it wasn’t muddy most of the day, the trails were fairly dry.

We made it back to the trailhead in good form, under 9 hours round trip. The three cold Cokes disappeared in about 10 seconds; the three milkshakes at the Noonmark didn’t make it much longer.

Conditions were less than ideal, and the hike was easily twice as hard as usual. My two girls never complained once. They set the pace most of the day, and did an amazing job. I’m incredibly lucky to have them. I’ve now summited High Peaks 129 times; Kathy, 67; and Kayla, 6. 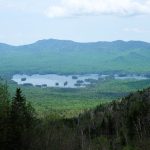 Elk Lake from the Macomb Slide 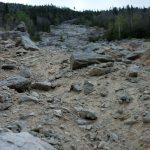 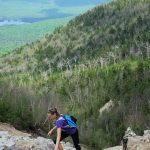 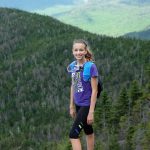 Atop the Macomb Slide 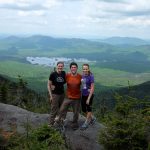 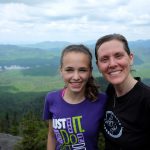