Hiking to a list (or, as I like to call it, a ‘goal’) can sometimes leave strange hanging fruit. Case in point, to finish hiking all 46 High Peaks in August (of any year, not just this one) I was left with four peaks: Allen, Nippletop, Gray and Haystack. The former two are rather isolated, but the latter two can be hiked in a loop through the ominously-named Panther Gorge.

Eleven months ago I hiked Haystack in conjunction with Gothics & Sawteeth, coming up the south side from Bartlett Ridge. This time I wanted to traverse the opposite direction, starting from the Adirondack Loj and the Van Hoevenberg Trail and descending past Bartlett Ridge to Panther Gorge.

There were clouds to mitigate some of the heat, but it was still humid, so after reaching Haystack in just under four hours the breeze was more clammy than cooling. It was midday, so there wasn’t great light for photographs and I didn’t linger.

As I descended to Bartlett Ridge and Panther Gorge I was a bit surprised at how steep it was. I remembered it as steep, but not this steep. Pictures don’t do it justice. After the slabs above treeline there was a surprising number of big drops almost the whole way to the junction. The last half of the descent to Panther Gorge was mud and roots, but not terribly so.

I filled up some water at the other Marcy Brook before heading up to Four Corners, which was a surprisingly easy 1.2 miles compared to the descent from Haystack. There I convinced a duo from Montreal to hike Gray with me, which we did in 30 minutes from Lake Tear of the Clouds. The herd path to Gray is sloppy and getting worse, so I was glad to see some boards had been helicoptered onto the summit, I presume to eliminate some of the deteriorating workarounds.

I descended a bit more slowly, and headed down to Feldspar. This would be the low point (no pun intended) of the hike. I got suckered by the last not-anchored floating bridge in the flooded section and my right leg dipped to my knee. I had almost traversed dry-footed, so I grumbled heavily as I changed into dry socks. They’ll build a 50-step ladder on a clean tacky slab going up to Mt. Colden but after years they won’t improve this route?

After clearing my brain, I powered the remaining 6 miles back to the Loj, where I had a late dinner waiting. The lentil soup was terrific, as was the flourless chocolate cake. I had overdone it a bit on my pace from Feldspar, so I had to take a break in between the two, but I was happy to have done a challenging, uncommon 21.5-mile and almost 6,000 vertical foot climb. 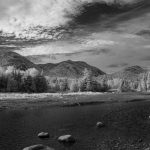 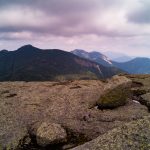 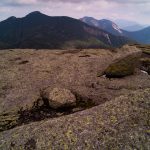 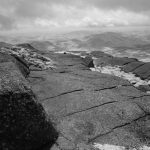 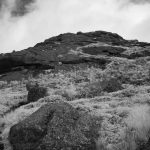 The south side of Haystack 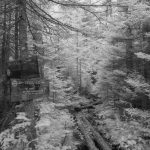 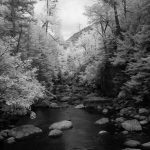 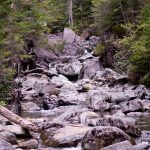 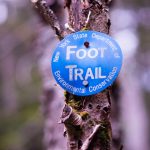 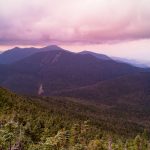 Colden and the MacIntyres from Gray Peak 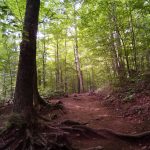