There were two important considerations in attempting these three: Low winds for the long exposed stretches, and the condition of Saddleback’s cliffs. The forecast looked promising for the former but we had no way of knowing the latter.

Joe Cedar and I set out from the Garden an hour before sunrise, the temperature a crisp -2°F. The trail was hard packed snow with lots of traffic for the first 3.5 miles to the Johns Brook Lodge. It seems that the throngs all headed to Gothics and Big Slide, as the footsteps disappeared on the Phelps trail — the way we were going.

Luckily, there was still a decent old track all the way to Slant Rock, where it was -10°F. There was still a faint trail beyond, but it had blown in, so we plowed our way uphill hoping that someone had traveled the Range trail ahead. We were overjoyed that someone had indeed broken out that segment, and we followed a track over Horse Hill and Little Haystack to Haystack proper. Normally that’s quite a story; on this cool, calm day it was as easy a hike to Haystack as I’ve had.

Back to the Range trail is where it got interesting. No one had been towards Basin in a long time, and the snow was waist deep. We plowed our way downhill fairly easily, but then had to break trail for the nearly 1,000 vertical feet uphill. We alternated the lead, but this was a job for 6. Two and a half hours and 1.4 miles later we summited Basin.

At least Saddleback looked white, suggesting that we would have a decent snow pack to ease climbing the cliffs. First we made our way down the twisting and turning Range trail down from Basin. In the summertime, the trail is obvious but covered in four feet of snow it is decidedly not, so we were happy when we dropped nicely in the col just at the mouth of the trail.

Just short of Saddleback I heard Joe talking to other hikers. Yes! We had broken trail for the last three+ hours, so meeting hikers means that someone else did the work for us. Except, they hadn’t, because they “left the snowshoes in the car.” (Just a tip: Don’t do that. In bare boots, you just drop knee- or thigh-deep with every step, creating ‘post holes’ instead of a follow-able track. Also, if you’re hiking a High Peak this winter: Yes, you need snowshoes.)

Back to breaking trail, and then we hit the cliffs.

Under the fine layer of powdery snow was an equally thin covering of ice. I’ve been up and down Saddleback’s cliffs 5 times, Joe many more than that; we weren’t sure that we could climb with these conditions. The thought of turning back over Basin was disheartening, and not just because we didn’t summit: It would involve re-climbing Basin then either breaking trail climbing Shorey’s shortcut or looping all the way to the Phelps trail, both more than 10 miles.

We donned our ice axes and Joe tried the first pitch, which is the trickiest. No luck, his Microspikes slipped right off the first foothold. (Note that my Hillsounds’ larger teeth gripped the same first step well.) We spent some time trying alternatives but after considerable thought used an axe and each other and made the first pitch.

We made the second pitch and proceeded to follow the blazes up, having to use the ice axes almost the whole way. Without them we never would have made it, the grip of our spikes simply wasn’t enough.

We spent considerable energy (mentally and physically) climbing, and after 50 exhausting minutes made it to the top. I’ve never been more proud to get to any summit in my life. It had taken several more hours than expected and we were still 7 miles from the car, but at least it was all downhill. It still hadn’t broken 0°F.

This winter has been no joke. Conditions are variable, there is no guarantee that any trail is broken out. Even with Joe’s experience we almost had to turn around two hikes in a row. It makes this trio all the sweeter. 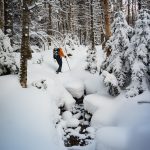 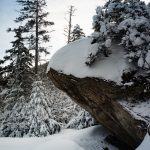 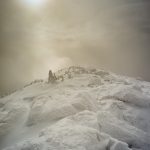 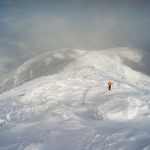 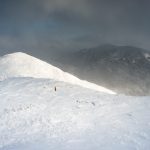 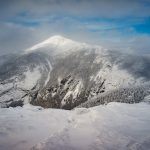 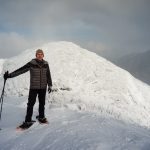 In front of Little Haystack 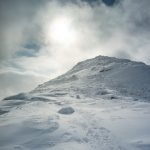 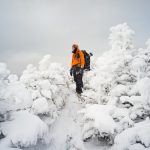 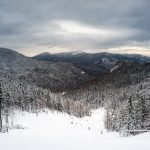