Seasons pass. This far north they linger a bit longer than at home, which I seem to appreciate more each year.

Absent a very unusual event, today was our last “winter” hike. Granted, the mostly-mud-and-ice was spring-like below 2,800 feet, but beyond that we enjoyed tromping in snow, some of it several feet deep and snowshoe-worthy.

We were the second group on the mountain despite our lazy 7:30AM start. It was 30°F at signing in, but was expected to rise all day as a warm storm front moved through.

We made a very workmanlike ascent of Algonquin, enjoying some late morning light and an empty summit. When another group appeared, we headed off to Iroquois. Once off Algonquin’s sun-drenched summit, there was still a significant snow pack. We floated several feet above Iroquois’ notoriously muddy stretches, making it smoother than normal.

I normally love the views from Iroquois and today was no exception. Wallface Mountain’s cliffs drop precipitously below, Marshall just beyond, the Santanonis and Sewards hover in the distance. The hazy sunshine stayed for our visit and we leapfrogged the Algonquin group back the way we came.

Kathy decided that she had enough to add on Wright Peak after hiking back over Algonquin, and we made the 0.4-mile ascent in just 19 minutes. As usual, it was windy but beautiful.

Much of the ice below 2,800 feet had melted by our return. The trees are budding, and it was 58°F when we returned to the car. Winter is moving out, and spring has arrived in the Adirondacks. 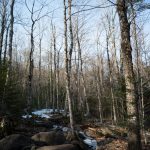 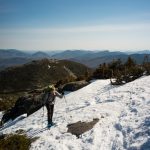 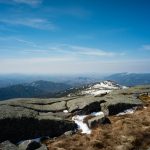 Iroquois (center) and the Santanonis (right rear) from Algonquin 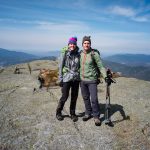 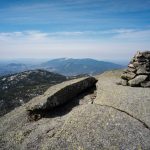 Marshall (left) and the Santanonis (center rear) from Iroquois 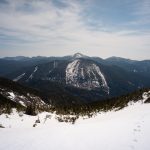 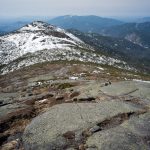 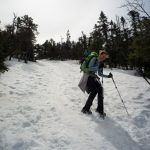 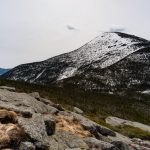