After two straight days of being thoroughly drenched, we wanted something relatively dry. I knew the excellent Leach Trail to Dial & Nippletop, with much of the hike on a ridge, would fit my criteria.

The entire way to Nippletop, almost 6 miles from Lake Road, was wonderful. Only a handful of muddy spots, surprisingly few given our recent rainfall. Weather was fantastic, low 60s Fahrenheit and little humidity.

About a quarter mile before Nippletop, we met a father hiking with his daughter, and they told us about the bear they saw on the summit. Lo and behold, said bear had followed them and popped out on the trail just 100 yards in front of us. He was huge, maybe 600 pounds. We would later meet a field biologist who, based on the paw print, told us it was a yearling and probably 120 pounds. I mean, who are you going to believe, right?

The four of us grouped together and started yelling and clanking poles. The bear clearly couldn’t be bothered and sauntered off the ridge to the East. It was the first bear I’ve seen in 1,500 miles of ADK hiking.

Rather than backtrack on our return, we decided to descend to the west via Elk Pass. Things were again shockingly dry, with only a few sloppy spots between the ponds and the Gill Brook trail. As a bonus, we turned up to Fish Hawk Cliffs and Indian Head for some late afternoon views over the Lower Ausable Lake. 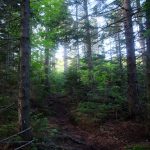 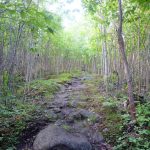 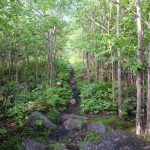 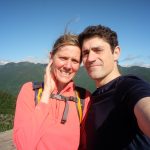 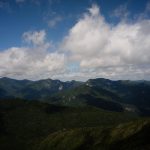 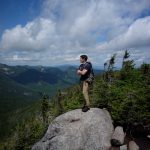 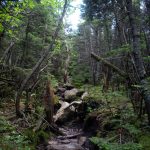 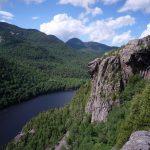 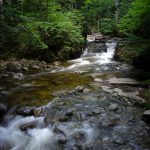