Back in July 2009, we hiked our first Adirondack High Peak, a 2.3-mile jaunt up Cascade Mountain. We made it, but definitely not in ‘style’, and we were far too exhausted after the 1,950 feet of climbing to consider tacking on the (easy) spur trail to Porter.

Fast forward to 2017, where weather and schedules align for a three-day weekend of hiking with Kathy, her sister, and our niece & nephew. I had to find us a hike which Kathy hadn’t done this year, and her sister (3 peaks) and niece (8 peaks) hadn’t done, but also one which our new-to-the-ADKs nephew could do. It also had to have reliable parking, and be within reasonable driving to Albany. It was harder calculus than you might think!

I settled on attempting Gothics (elevation: 4,736 feet) from the Ausable Club, which entails going over Pyramid Peak on the way. I was worried about the nearly 3,000 feet of straight climbing in the 3 miles from Lower Ausable Lake to the top of Gothics. (Remembering that the 1,950 vertical feet to Cascade almost killed me.)

I was banking that every 13-year-old boy loves climbing rock slabs, which were dime-a-dozen on this hike, and I was right. He had no problem keeping right up with me and his sister (a.k.a. the Little Great One) straight up to Pyramid. From there it was straight down and straight back up to Gothics, which both kids tackled with aplomb. The sun was out, there was a cool breeze (it was about 60°F) and we celebrated a first High Peak with stellar views and lunch.

Returning the same way, we had a choice to take the half-mile (each way) spur to the summit of Sawteeth. I knew that both kids would have no problem with the additional 400 feet of climbing, and their mom went gamely along. After summiting, the new 2er and 10er showed their young knees by bounding back to the main trail, where they waited for the near-geriatric crew to arrive.

I paced the two young ones back to the lake, and we all made the walk out ‘in style’. We had done 14 miles, about 4,500 total feet of vertical, earning our milkshakes at the Noonmark. Now we had to wonder who would make it for Sunday’s hike, too… 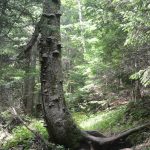 Along the Weld Trail 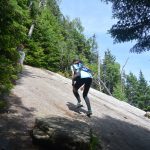 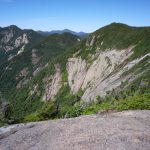 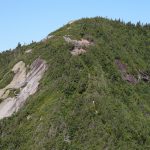 Gothics from Pyramid; You can see the trail in two spots below the people near the top 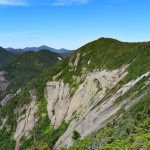 View of Gothics & Saddleback from Pyramid (MacIntyres far back) 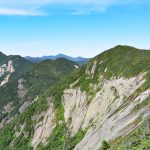 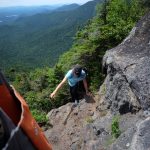 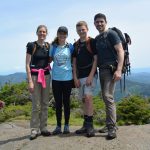 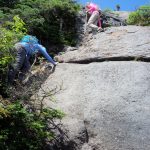 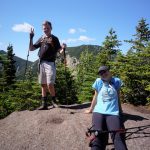 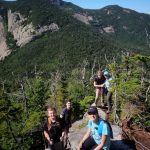