This would be my fifth visit to this southwestern Adirondack range, and Kathy’s second. Saturday was a perfect day, plenty of sunshine with a few clouds, highs in the low 50s. Even with the advance notice, the 30°F at 7:30am felt abnormally cold, so we were both happy to have gloves and soft shell jackets.

After making two stream crossings, the trail to Bradley Pond was its usual flooded mess, filled with decaying corduroy walkways, mud and leaves. Early in the hike, we prioritized keeping our feet dry, not always successfully.

On her first visit, the “new” trail to Santanoni (colloquially the “Express” trail) had recently re-opened. While there have been complaints about how badly deteriorated it had become, with just a couple exceptions it wasn’t in that bad of shape. It was definitely better going up than down, especially the one slab which has now developed a full herd path deviation. (We made our way up the slab carefully without issue.)

The vistas from the summit ridge were beautiful, although coming off last autumns ‘color bomb’, this year is a disappointment. The view down Indian Pass, with Wallface towering above it, was particularly striking.

The descent off Santanoni was steep and muddy, a bit wetter than average after recent rains. After the main junction (nicknamed ‘Times Square’) most of the way to Couchsachraga was in decent shape despite its reputation. The low point was, as always, a mud-filled bog. Unlike her first time, Kathy made it across unscathed.

Couchsacraga is the only mountain that you climb to get off of. The trail from Times Square descends a full 800 feet down to the bog, so the return has you climbing as much. It’s the longest 1.6 miles in the park.

The side jaunt to Panther Peak is a quick 15 minute climb. They recently built a rock walkway along the summit ridge where it normally floods. It’s ugly; they might as well have used pavers from Home Depot.

The descent to Bradley Pond steeply drops into Panther Brook, and after nearly 5,000 feet of climbing feels harder than it is. Back in 2013 I was dying by this time, with my knees screaming and quads burning. In four years I’ve come a long way, and thoroughly enjoyed the descent. (Kathy perhaps not so much.)

We made it out by headlamp, completing a difficult half day of hiking. 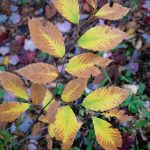 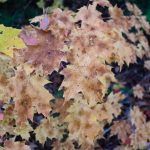 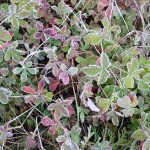 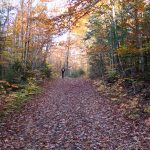 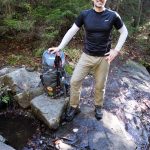 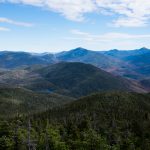 View over Bradley Pond to the High Peaks from Santanoni 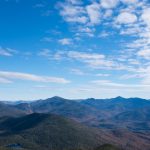 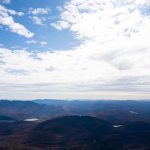 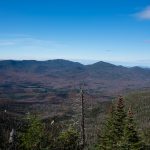 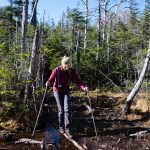 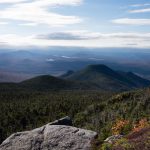 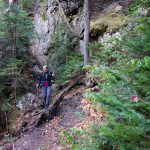