[Note: Written August 2014; back-dated to date of the actual hike.]

Apparently, there are some good hikes in the Adirondacks.

Back in 2009, Kathy and I took Ben up to watch our friends Matt & Beth in the Lake Placid Ironman. I had never been hiking before, and Kathy had a series of bad camping experiences, so the plan for the visit was to simply hang out. But after an amazing 13-hour finish by our new Ironmen friends, they weren’t much in the mood for anything the days after which involved moving muscles.

Looking through the guidebook left at the cabin, it suggested some hikes from easy to hard. After successfully climbing the mile or so to the picture-perfect balanced rock on Pitchoff Mountain, the photographer in me was hooked. So, the next day, I took Kathy & Ben up our first High Peak, Cascade Mountain.

It was hot. And humid. Showing our inexperience, Kathy and I wore jeans and lugged between us 3 cameras and 5 huge lenses in woefully inadequate camera bags. We had at least learned from Pitchoff and packed some food and water.

Cascade Mountain is, along with Mount Marcy, the most popular summit in the Adirondacks. It benefits from a relatively short 3-mile hike which starts from well-traveled Route 73 and spectacular 360 degree panoramic views.

In retrospect, Cascade was one of the easiest hikes we did, possibly even easier than our hike up to Hurricane Mountain. At the time, the three of us were seriously questioning how the guidebook could possibly label the steep ascent (there aren’t any switchbacks in the Adirondacks) as ‘moderate’.

Just like Pitchoff, Cascade’s summit had its payoff. Not only did it have a view for miles, but the upper portion of the hike was over bare rock, with a refreshing breeze providing an exhilarating finish.

Looking back at the photos, we have clearly learned from the subsequent 45 Adirondack summits. We gradually added better clothing, wicking for the hot and wind/water resistant for the cool, and upgraded to stickier shoes. Most importantly, we ditched the useless camera bags and gradually downsized the photographic gear, in the process dropping over 20 pounds of poorly-supported weight.

Hiking the 46 Adirondack High Peaks has also changed us physically – I’m clearly leaner than I was 5 years ago and Ben has transformed from a boy into a man. Kathy may look exactly the same, but we both are clearly stronger, and would consider Cascade not as a ‘moderate’ hike but as a clearly ‘easy’ one. This may be as much to do with how we’ve grown mentally rather than physically, and it is this transformation which surprised us the most.

All of it started on Cascade Mountain, on a hot July day in 2009. 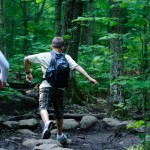 Little Ben starts out on our first High Peak 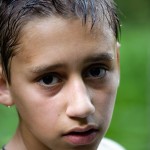 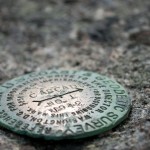 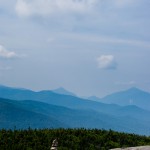 Hazy but pretty summit on Cascade 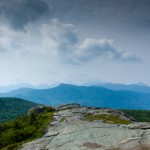 Towards the Great Range and Big Slide, where our 46 would start in earnest 3 years later. 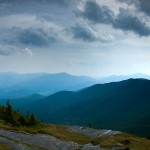 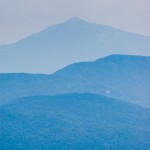 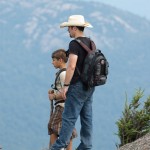 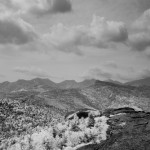 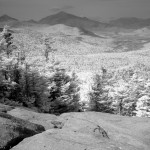 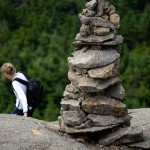 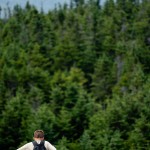 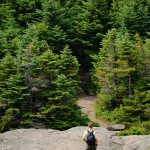 Back into the woods for the way out