After a rest day, we started ticking off the high peaks. The initial plan for the day was to climb the Wolfjaws and see how we felt about continuing on to Armstrong and potentially (but unlikely) Gothics.

The Ausable Club allows public access to its private road, making the first couple miles in and out of these hikes easy. After checking in at the gate, we turned up the West River Trail and hiked up to 4,173-foot Lower Wolfjaw following the pretty Wedge Brook. In retrospect, Ben and I should have bushwhacked to go up the slide which starts the Wedge Brook itself, as we would have enjoyed it immensely.

We made it fairly easily up to Lower Wolfjaw which offered better views on the way than on the top, and then went back down-and-up to get to 4,173-foot Upper Wolfjaw. The hike up to Upper Wolfjaw was a lot of fun – there were crevices to climb and some steep rock faces, some of them shown in the pictures below.

After lunch on Upper Wolfjaw, we easily had enough in us to make it to 4,400-foot Armstrong. The day before, the neighbors had warned us about the down-up-down-up nature of the hike across this range, which is why we hadn’t committed to doing three mountains. Surveying our water, we decided after Armstrong to head back down towards Beaver Meadow Falls (shown in the pictures) and to the car. I realized that we could make another day for Gothics, which we did.

The total loop was 13.3 miles. All but the middle part of the descent to Beaver Meadow Falls was in good shape and a nice hike. It was a good bit of work, especially getting up to Upper Wolfjaw and down from Armstrong, but after this hike we confirmed that we were ready for just about anything. 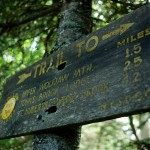 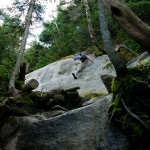 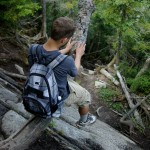 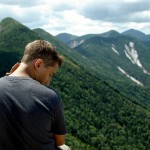 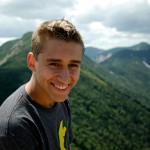 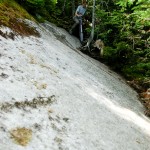 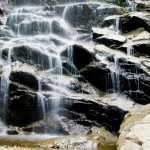 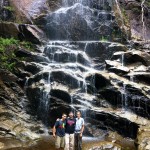 Only three miles to the car!