Such an unassuming title: Pennsylvania State Game Lands Number 13. Located just to the west of the famous and fabulous Ricketts Glen State Park, I had a hard time finding reliable information about this hike. Thanks to the excellent Mid-Atlantic Hikes page, we settled on making the 8-mile bushwhack attributed there as Jeff Mitchell’s Waterfall Wonderland.

Wanting to try my first bushwhack and being a huge fan of Ricketts Glen, I had high hopes for this hike.

It did not disappoint.

After some initial route-finding issues (in the car) we set out on our way at about 11am. It was a sunny day, and far past peak foliage, so I was worried about the bright sunshine canceling photo opportunities. Thankfully it was cool and I was interested in a hike regardless.

After orienting ourselves and making our first stream crossing, we followed an access road uphill away from and then again towards the water. Hearing the first waterfall, we hiked steeply (and slowly) down to the first falls. From there we followed the various banks, crossing continuously to avoid getting penned in by cliffs, up the Heberly Run to Lewis Falls.

Here the trail split into two small tributaries, so we joined an unmaintained plateau trail, starting with a surprisingly consistent 800-vertical foot climb. The trail was relatively straightforward even completely covered in fallen leaves, with several muddy pitches and only a few unobvious turns.

After meeting the only other hikers we encountered all day, we left the trail for the return down the Sullivan Branch.

Now late afternoon, the falls were fully shaded and were stunning. Every bit as pretty and varied as the lovely Ricketts Glen, we enjoyed the falls as we made our way downstream. Even without much foliage cover, the Sullivan Branch was well worth the hike.

After losing a Gorillapod and with the stream making a casualty of one camera, we bushwhacked back to the trail and headed back to the car. Six and a half hours later we were back at the car, having encountered precious few other humans and virtually no trace of them either. This was easily the most enjoyable hike in Pennsylvania that I’ve done, thanks to its solitude, ruggedness, beauty and remoteness. 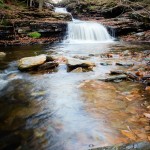 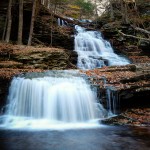 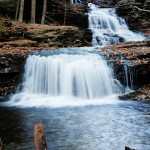 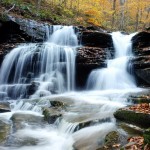 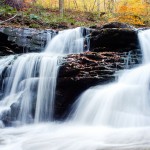 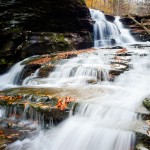