Back in 2012, we hiked Sawteeth in conjunction with Gothics in our first Adirondack traverse. Gothics was the star of that hike, with its (in)famous cable route and sprawling vistas. Sawteeth was a half-mile out-and-back-again tacked on somewhat as an afterthought.

This year, we wanted to explore more of the trails we missed in our first round of 46, and the Scenic Trail to Sawteeth was a good candidate.

The Scenic Trail climbs parallel to the Lower Ausable Lake, with plenty of spots to stop and take in a vista. The trail starts with a looming view of Indian Head as you meander through forest trails, then you slowly start to see Nippletop, Dial, and the rest of the Colvin Range (and even Dix) among points south and east. Once past the cutoff to the Marble Point Lookout the trail becomes steeper and more rugged, helped by the addition of a few well-placed sturdy ladders.

After 3 miles, the Scenic Trail reaches the summit, offering nice views west dominated by Basin and most of the Great Range. Continuing the loop towards the Sawteeth-Pyramid col you get wonderful close-up views of Gothics as well. This section of the trail is a bit rocky and steep, but only a half mile until it intersects the Weld Trail.

The Weld Trail was better than we remembered from 2012, being a bit rocky at the top but leveling off and following brooks down most of the remaining 1.6 miles to the intersection with Rainbow Falls. Beyond that is a 4-mile walk out Lake Road to the Ausable Club public parking, making the loop a very interesting and often pretty 13 miles.

I’ve read a lot of advice suggesting this loop in the opposite direction – up the Weld Trail, down the Scenic Trail – but for us, this was was far better. We are better ascending than descending, so this plays to the strengths of the clockwise loop. We were also warned by the ranger at the register not to take the Scenic Route (he called it “rough”) and this turned out to be terribly wrong and bad form to boot – the hardest, roughest section of trail was from the summit to the Pyramid col, which was part of the Weld Trail, not the Scenic. 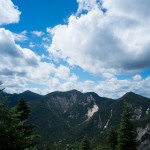 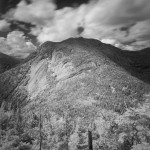 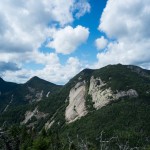