After climbing Porter Mountain via Little Porter (and Blueberry Mt.) this summer solo, I wanted to bring Kathy along this interesting and scenic route. We also voted with our appetites to do a short hike which returned for a lunch at the ADK Cafe.

We were on the trail at 6:45 AM, about a half hour before sunrise, and surprisingly were the second ones going to Little Porter and Porter. When I hiked this way in August, I saw exactly one couple the entire day.

The initial 1.8 miles to Little Porter Mountain was lovely if a bit eerie without leaves on the trees. Those leaves, in fact, were instead on the trail itself, making a couple spots difficult to follow, but only briefly.

Upon getting to Little Porter’s summit, we saw a sheet of white. We were inside the clouds, and it was cool and damp. Six minutes later, the veil dropped from top to bottom, and the tips of the peaks jutted from the blanket of clouds lingering in the valley. It was a surreal, beautiful scene.

The 2 miles from Little Porter to Porter Mountain were wetter than I remembered, and consistent but not too steep at any point. There was no snow or ice until the last 0.2 miles along the ridge line, and that was easily avoidable.

Porter’s summit was lovely, which we enjoyed to ourselves. The clouds were slowly clearing from south to north, making for a lovely vista. We made short work of the descent and were sitting for a hot lunch by 12:45 PM. 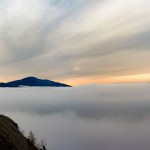 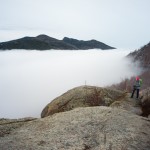 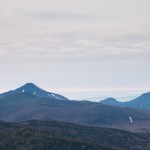 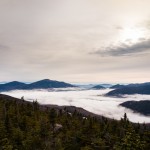 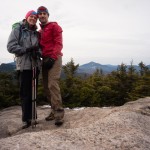 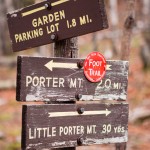