I had a few goals for this trip: Re-hiking Skylight with Kathy, getting Kayla & Linay started hiking High Peaks, and exploring new trails. Two trails I set out for the trip were the Scenic Trail to Sawteeth and this one, Porter Mountain via Little Porter.

Shortly after veering from the junction to Big Slide, the trail fills with raspberry bushes (I ate a few) and passes over some private land. This is where you have the rarest treat for Adirondack hiking: Switchbacks! Thanks to a modern re-route of Jim Goodwin’s 1924 route, the entire ascent to Little Porter Mountain has a mild, continuous ascent.

The summit of Little Porter Mountain offers delicious views from Giant Mountain to Round Mountain & Noonmark and across the Great Range.

The trail to Porter Mountain alternated between typical Adirondack forest and a more mid-Atlantic grassy meadow, apparently thanks to a recent fire. Like the start, it was never too steep and always soft underfoot and picturesque.

I encountered my first other humans at the summit of crowded Porter Mountain. I stopped for a brief photo and quickly headed back the Range Trail towards Blueberry Mountain. On the way, there was a perfect rock outcropping offering views of Porter and Cascade, after which I continued towards Blueberry.

The start of the Ridge Trail towards Blueberry was much the same soft, forest duff as the ascent over Little Porter. It changed mid-way down to the col into a steep, rocky, rough drainage. I was thankful to be going down rather than up this section.

Just at the foot of the drainage was lovely Blueberry Mountain, with a gigantic open rocky summit and equally large vistas. It also, of course, was filled with blueberries.

The final descent was fairly typical Adirondack rock & mud after coming off the steep slabs of rock atop Blueberry Mountain. Marcy Airfield was just 2.4 miles from the summit, ending an atypical but wonderful route to Porter Mountain. 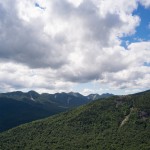 View of the Great Range from Little Porter 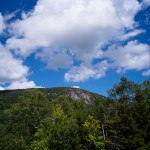 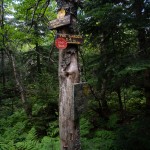 Junction with the Ridge Trail 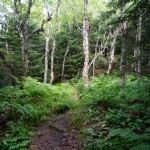 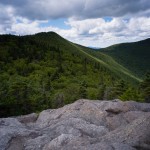 Looking back at Porter Mountain from the Ridge Trail 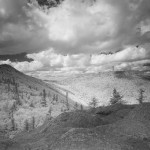 Porter and Cascade from the Ridge Trail 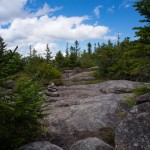 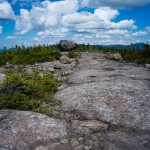 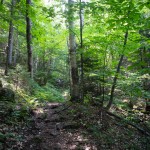