With the forecast calling for cold rain, probably the worst hiking conditions, I decided to take another “easy” day. That meant setting out for Phelps and TableTop, about 13.5 miles round trip from the Adirondack Loj.

It started snowing in the parking lot, where I happened to run into Rich — the super-hiker I saw at 6AM on Saturday — and he was still hiking since then (Monday). He had a spot on his nose from where he fell asleep while hiking Allen. Not deliberately, as in setting up a sleeping bag or something, he just dozed off mid stride like can happen driving. Wow.

In order to foil the rain, I decided that starting early and gaining elevation would keep it snow. I was correct, even more than I expected. There was at least 6 inches of new powder going up both Phelps and TableTop, making them fun trail breaking hikes. The wind was whipping, however, forcing my head down at least for the ascents.

TableTop has been re-routed from the last time I was there, and I loved the new trail. Where the old trail was just a straight, dark ditch which ascended straight up the mountain, the new trail angles in nicely and creates a gentler approach.

The re-routed trail also sits very nearly at the top of Indian Falls, which I knew crossed over to Mount Colden…so I decided to keep going. I had never been down the Indian Falls cut-over and like the other trails was covered in new powder, making it pretty and less windy than the summits. The cut-over intersects the Lake Arnold trail about 1.8 miles from the summit of Mount Colden.

I ascended the L. Morgan Porter trail to Mount Colden, which was covered in new snow and some heavy drifts. The wind was eerily calm on the eastern side of the mountain, and as soon as I popped out on the north (false) summit I was pelted with gale-force winds. I made a quick left turn for the actual summit.

Some of the drifts were taller than me, in particular the one which nearly covered a giant boulder near the summit under which the trail runs. It was like climbing a haystack (the farm ones, not the mountain) and once past the boulder I was exposed to the windward side of Colden, so I didn’t linger.

After 17.9 miles (or so) I was back at the car. I kept a slower than usual pace in the hopes that I felt better at the end, and I think I did. But hey, I got to play in soft snow all day long. What’s not to be happy about? 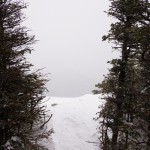 View (or not) from Phelps 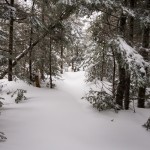 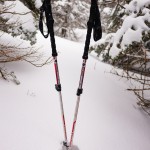 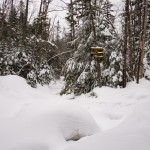 Junction from Indian Falls (tracks are mine) 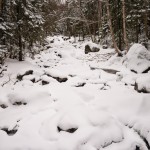