Chalk this one up as one part redemption, one part ambition, and one part perseverance.

Isolated from the other mountains by a deep col, 4,360-foot Mt. Marshall is the southernmost peak in the MacIntyre Range. There are two herd paths leading to its summit, one from the northeast via Cold Brook Pass and one which follows Herbert Brook southeast to Flowed Lands. Cold Brook Pass runs from Lake Colden northwest to Indian Pass, with only the Colden side receiving regular maintenance.

Despite the sometimes rough path up Cold Brook, Indian Pass more than compensates, with a soft, isolated and serene 4.9-mile approach.

This was my second attempt in as many weeks to climb Marshall. Uncharacteristically, I aborted the first attempt after leaving the trail and trying to bushwhack to the summit. About halfway up Cold Brook, the trail takes a clearly marked hard left turn, which in retrospect is what I missed. While last week was an eye-opener (with immense respect for true off-trail navigation!) this week was simply perfect, as this normally soaking wet approach was completely dry. Redemption on Mount Marshall’s lonely summit.

Despite the humidity, I felt strong on Marshall and it was early. Given how dry the herd path from Cold Brook Pass was, I decided to forge ahead, and added Cliff and Redfield to my agenda: Ambition.

The descent down Herbert Brook was incredibly dry, giving me hope for the notoriously swampy approach to Cliff Mountain. Eating my sandwich while crossing over the base of Lake Colden (and taking the obligatory photo) I stopped to enjoy the meandering Opalescent River, which in places carved 40-foot chasms just off the trail.

The start to Cliff, at the base of Uphill Brook, was still a muddy, swampy mess. Shortly thereafter my hopes were founded, as almost all of the trail was dry the rest of the way to the cattle-pen summit. It was mostly sunny but humid, and by this point there was virtually no breeze. I followed my tracks back to Uphill Brook.

The herd path to Redfield follows Uphill Brook and a tributary all the way to about 4,000′ elevation, which I used to cool down the whole way. At the turnoff from Cliff, I was 14 miles in to the day, and it was getting oppressively humid. Just like our Memorial Day hike, it was the total lack of a breeze which made the hiking laborious. It was a challenge to make the last 600 vertical feet without the brook to cool off, so I soaked up the views from the top.

Looking northeast from Mount Redfield, Mount Marcy juts out above Gray Peak and Mount Skylight. Allen Mountain and quirky Cheney Cobble sit to the south. Walking just west of the summit, I enjoyed the view back to the MacIntyres and seeing my path for the day. Everything looks closer from on high.

The descent from Redfield took longer than normal due to my stopping and laying with my head and arms in the cold pools of Uphill Brook. Again at the base of the brook, I had over 8 miles to go with less than 3 hours of daylight. I took my last break at the junction with the Feldspar Brook trail (to Mount Marcy), 6.6 miles from the Adirondack Loj. It was 6:30 PM.

Every other time we’ve taken this route, the foot of the Feldspar Brook has been completely submerged, requiring a complete soaking across some dubiously-floating logs. Even considering how dry it had been everywhere else, I was still shocked that even here the water was so low that the logs were completely stable and dry!

I put my head down and powered up the 1.7 miles/500 vertical feet climb to Lake Arnold. 35 minutes! I couldn’t believe it. I barely grunted at the gentlemen I flew past coming the other way.

After Lake Arnold it was a steeply descending 1,100 vertical feet in 1.5 miles, another 1.1 miles to Marcy Dam, and 39 minutes and 2.3 miles later, I was at the Loj just as dusk was settling in.

All told, it was about 23 miles, 6,000 vertical feet, and 13 hours. These three peaks are normally two long days, but with enough will they make a single inspiring, exhausting, rewarding one. 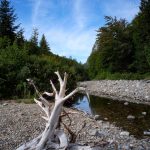 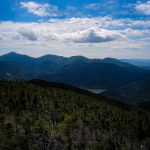 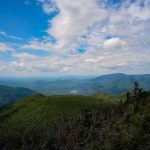 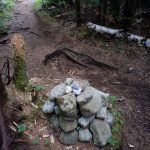 Base of Herbert Brook herd path 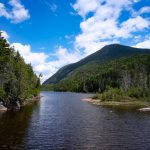 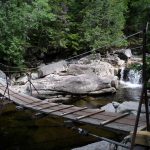 Suspension bridge across the Opalescent River 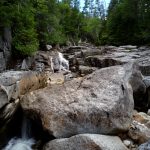 Rocky cascade along the Opalescent 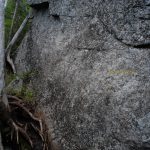 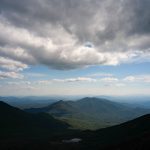 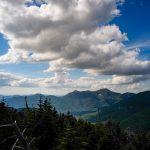 View of the MacIntyres from Redfield 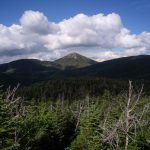 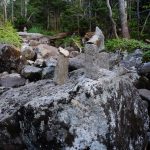