I had five days available, with five “normal” hikes planned; any chance to string multiples together would save me from driving on a hiking day, which is always welcome.

I met the esteemed Joe Cedar (soon to be 68 years old) at the ADK Cafe for breakfast, and he followed me to the Garden parking and shuttled me to the Cascade parking lot. This way, I could climb in over Cascade & Porter and traverse to the Garden via Little Porter Mountain, one of my favorite trails in the whole park. I had booked the Johns Brook Lodge for the next three nights, so this allowed me to pack the food and clothes only for the 3.5-mile hike from the Garden.

I was planning a leisurely stroll until, as Joe was dropping me at the trailhead, he mentioned how he had hiked Cascade the previous day “in 55 minutes.” Ugh. It’s 2.3 miles with 1,900 vertical feet of gain. I never timed myself but after huffing and puffing behind Joe around the Dixes, I knew this was faster than I had ever done it. So I signed in the register, hit the stopwatch and double-stepped it up the bone-dry and empty trail.

I’ve learned how to ‘zone out’ while hiking and just keep walking, which makes continuous ascents (like this one) mentally easier. I didn’t look at my watch until about 40 minutes in; my altimeter read 3,700 feet. (Cascade’s summit is at 4,098 feet elevation.) This only made it worse, because I knew I could do it. I double-double stepped.

I stopped the timer as I hunched over Cascade’s summit disc, breathing as if I had just run a four-minute mile: 53 minutes, 17 seconds. (Note that this is not better than Joe’s best time ever. And yeah, he’s 24 years older than me.) Afterward, Kathy would ask why I’m so competitive, but really I was only competing with myself. It was fascinating to see if I could climb with one of the strongest hikers in the Adirondacks.

After taking (too long) time to catch my breath and enjoy the empty summit, I headed over to Porter Mountain. The route was littered with mushrooms of all colors and shapes. I enjoyed some views from the summit and headed over to Little Porter Mountain for those expansive views. The only downside was the nasty sting on the back of my arm which seemed to burn with every new heartbeat, luckily it was just before getting back to my car and the Garden.

From there I packed up my food and clothes for the next three days and headed in to the Johns Brook Lodge, which in caretaker season offers a bed, bathroom (no showers), and full kitchen with a refrigerator. It turned out that I was the only guest that night, so I had the 28-person lodge all to myself!

Compared to my day pack, the 25 pounds of clothes and food felt like a million, so I was relieved to drop it before heading up to Big Slide. (I would later learn that the caretakers routinely carry 70 pound packs on the same route I took!) I ascended via the Slide Brook Mountain trail, which I had never taken before. It followed Slide Brook part of the way, then turned into a fairly steep ascent for the last 1.5 miles to Big Slide’s summit. It rained a bit, which was a reprieve from the heat but my Vibram “super sticky” soles were anything but. More like Vibram “banana peel” soles. (They’re junk, don’t buy them.)

Clouds were whipping past the Great Range from Big Slide, one of my favorite vistas. It was getting late, so I headed down and enjoyed a huge steak & salad for dinner. Two in one was nice for the day, and at about 16 miles with 5,400 vertical feet I still felt strong. I would need it for the next day. 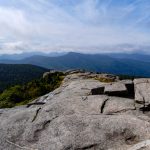 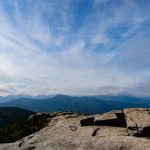 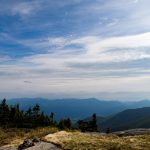 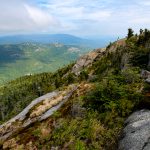 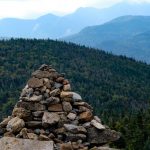 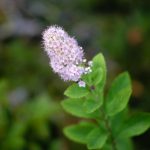 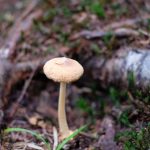 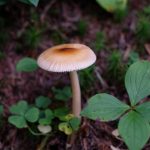 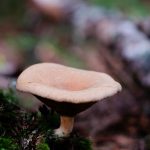 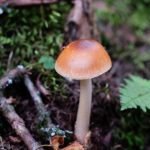 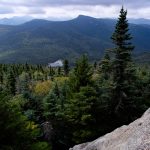 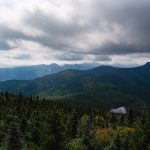 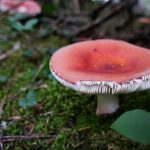 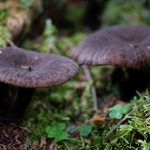 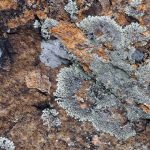 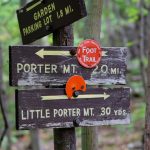 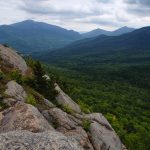 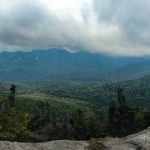