I was staying at the Johns Brook Lodge, an interior outpost 3.5 miles from the nearest trailhead. I had hiked the two previous days and had two days planned, but decided over coffee that I could actually combine both hikes into one long one and get back home a day early. The only problem was the Ausable valley between the two hikes.

Because I was originally only planning half of this hike, I had slept in. I had a leisurely breakfast with the caretakers and started at 8:30 AM, easily three hours later than I should have.

I ascended Lower WolfJaw via the Bennies Brook slide, which I had never before hiked. It was fabulous. It was a mile and a half of grippy, easy to climb rock, which runs practically all the way up the mountain. I even had luck on my side as the cloud cover kept the sun off me the whole way. It was a great start.

The next segments were familiar to me: Down to WolfJaws Notch, steeply up to Upper WolfJaw, then down and steeply up to Armstrong Mountain, at 4,400 feet the high point of the first segment. I took my first break to dry out on the windy and scenic summit and kept going over the other side on my initial descent.

The descent starts on the Gothics side of Armstrong, and curiously climbs several ladders on the way down towards Beaver Meadow Falls and the Lower Ausable Lake. I like to refill water at the highest sources I can find (to mitigate the possibility of beaver and human infestation) and stopped at about 2,500 feet on the way down. A bit paranoid about the latter, I carry both a filter and a purifier, which unfortunately means that it takes over 5 minutes to filter & purify a liter of water.

Crossing over the lake at 1:45PM I was entering the second segment of my day, heading up Lake Road to Gill Brook. I had only seen 2 people all day, so I was surprised to see 5 people on the ascent of Mount Colvin. One of them was a solo female hiker about to finish her Northeast 111, having climbed all 115 4,000-footers in New York and New England.

I knew I was running out of daylight so I stopped only long enough to pick up some jerk’s bottle cap from the summit before heading over to Blake. This is a much-maligned segment, mainly because it’s an out-and-back with no real views on frankly an ugly trail. I don’t mind it, and made it to Blake in under an hour. I noticed on the way that my Spot tracking device was blinking red, I suspected the batteries were dying.

Coming back from Blake I was able to start on my favorite trails in the Adirondacks, those which lead to the Upper Ausable Lake. The “Elevator Shaft” drops 1,500 feet in 1.1 miles, but since it is so rarely used it’s much nicer (and faster) than usual. Past the lake I ran into my last humans on the day, a bunch of guys on a tractor. I tried to ply a Busch Light from them but they were on their last ones.

I was starting the third and final phase, heading 2,200 feet up to the Range Trail. First I stopped to change the batteries on my Spot, only to realize that my 4 backup AA batteries weren’t going to replace the 4 dead AAA ones in the device. (I had backups to my backups, but prioritized the headlamp which also took AAAs.) Instead I took an expended break at the idyllic Shanty Brook, still feeling strong (but hot) and expecting to finish in the dark.

The grade up the Bartlett Ridge is moderate and in decent shape, leading to the wonderful Haystack Brook Trail, a moderate climb through open and pristine forest. It is in great shape and provides views of Basin and Haystack all along the way, until it turns steeply up through a series of ladders. I gave up on the fading dusk and donned my headlamp for the latter third of the climb, now batting away moths in addition to my day-long fight with spiderwebs.

I started slowing down. Since I dreamed up this loop over coffee, I hadn’t realized that by this point I was over 8,000 vertical feet in, with much more to go if I wanted to climb Basin and Saddleback. It was 8:30PM, about an hour after sunset, before I made it to the Range Trail. It was dark. My Spot had stopped working. I had only seen 7 hikers all day long, none since 5 hours earlier. I decided to skip the last two summits and head back.

Unfortunately, it was the same distance (but less elevation gain, and easier) cutting over Shorey’s Shortcut as was my original plan. There is also a bit of a climb to get around the so-called shortcut, so I slowed considerably and started to feel the effects of the long hike. Nothing sounded appetizing, even the 12-ounce filet waiting for me back at the JBL. I just kept putting one foot in front of the other, brushing aside spiderwebs and swatting away moths. It’s at this point of the hike that I made a decision on my initial question about the epiphany vs. crazy idea.

My pace slowed again. Everything seemed flat from the overhead light, making the steep pitches tedious. I was relieved to finally get to Slant Rock, but a bit surprised that there were no campers at this popular spot. I plodded forward. Coming up on the last junction sign, every turn was looking familiar, so seeing the “Johns Brook Lodge 1.5 miles” was a body blow. I said (I think out loud) “no way!” It felt like it had been hours since Slant Rock (it hadn’t been) but I had no choice to just keep on.

I got back to the JBL, slapped some AAA batteries into my Spot, and crashed flat on the front deck while it sent the ‘All OK’ signal home. It was a magnificent and somewhat unbelievable 24-mile, 9,000 vertical foot day. I stared at the stars, marveled at Scorpius and Sagittarius and let the breeze finally cool me down. 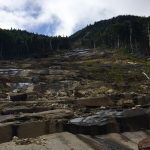 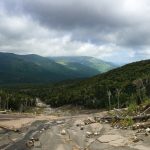 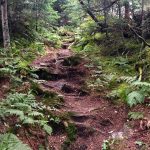 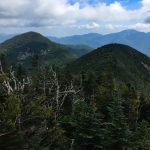 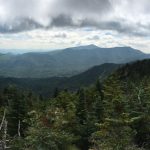 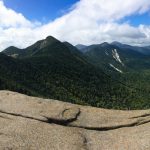 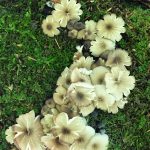 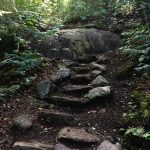 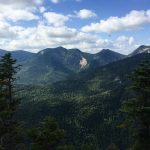 Basin (center) and Saddleback (r) with dragonflies from Colvin 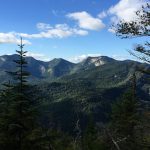 “View” from near Blake Peak 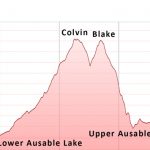