It’s been a long 9 months waiting for winter to arrive. After coming within 6 of finishing all 46 High Peaks in the winter of 2015-2016 with only one day to hike them, I resigned myself to watching the pages of the calendar flip by.

Unlike last winter, though, this one actually started out as, you know, winter. My preparatory hikes two weekends prior were snow-shoeable and the weather was crisp and cool.

I ran into another hiker headed to Sawteeth at the sign-in register, and I enjoyed our conversation for a few miles of the otherwise dull Lake Road. We split before Lower Ausable Lake and I quickly changed into snowshoes for the climb up the Weld Trail. I was crossing my fingers for the clouds to part, but once I got near the summit of Sawteeth I realized that the whole Great Range was socked in.

Pyramid stayed in the clouds, and passing over to the Gothics side it was covered in waist-deep blowing, powdery snow. This made for a speedy descent into the col, but the climb to Gothics was like climbing a haystack. One step up, slide two steps back. I slowed to a crawl and just tried to get each step to bite, to varying success.

Gothics itself was a surreal sci-fi landscape, the exposed rock blown clear of snow but hanging on to a thin layer of ice. With the strong wind, I didn’t linger, but luckily it wasn’t too cold — it was about 18°F — and I was quickly off for Armstrong.

Kathy and I already hiked Armstrong for our winter round, but it wasn’t much more effort to add it on the way down. It too had no views, so I turned around and sped down. I made a bad turn onto the West River Trail instead of crossing over immediately to Lake Road, and by the time I realized it I was too far to turn back. I cursed all the interminable ups & downs and twists in the trail, and was happy to finally cross the river to head back to Lake Road. My time was similar to my hike in October, mainly because of all the time saved gliding downhill on the snow.

On the way back home I stopped at Marcy Airfield for the dramatic sky. They have the giant tree lit up for Christmas, but alas I was too early for the lights to be on. 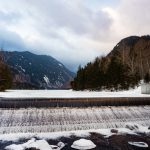 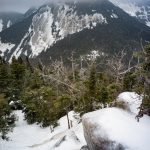 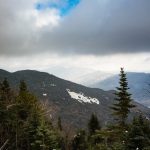 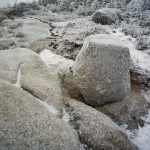 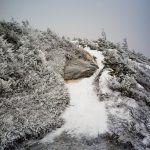 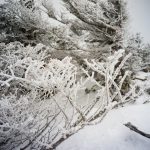 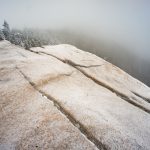 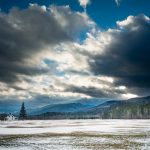