This winter hasn’t disappointed with opportunities to break trail, with another storm moving through April 1. I was pretty sure that I wouldn’t be the only one hiking on the 2nd, with mild temperatures, sunshine, and fresh snow. I even figured that Allen, one of the more remote peaks at 9 miles from the closest trailhead, might only require breaking the new foot of snow.

I drove up Saturday afternoon, planning to hammock half way and get some awe-inspiring early morning summit views. A group had signed in before me that day, but just a mile in, their tracks stopped. As was noted from a ranger on the register, they weren’t wearing snowshoes, so after post-holing their way to the Mt. Adams junction they gave up. There was only about 6″ of fresh snow in the valley, and it was soft but not sticky, so I was happy to blaze the trail myself. The storm was moving out as the sun set, giving me some sublime views of snow-dusted mountains along the way.

At my planned stopping point, just past the second register about 5.5 miles in, I encountered another set of tracks. I hadn’t noticed initially, but a group of three had signed in on the 31st, and they must have had the same idea as me. I ended up sleeping just 100 yards from them, and they were a good alarm clock at 6AM.

By 7:15AM, I was off for Allen. The trio blazed a good trail for me, and by 8:30AM I had passed Skylight Brook and was climbing. A part of me (the masochistic part?) was a little disappointed that I only had to follow their track, but it does save quite a bit of time.

Then came my April fool’s. I passed some pristine forest that I didn’t recognize and then the footsteps circled around. This wasn’t right — did I miss a turn? The tracks indeed looped right back on themselves; the trio made it to about 2,600 feet. Uh-oh. No one else had signed in for Allen since the 23rd of March.

I knew the route followed Skylight Brook to Allen Brook, so I angled a bit to the left and side-hilled my way closer to the brook. Lo and behold, I found a sawed off stump, so I was back on the trail. Unfortunately there was zero sign of a previous track, by now there was a good 12″ of fresh snow covering everything. (It was beautiful though.)

I made a couple false stabs, mainly because I knew I was walking up a stream bed and once or twice climbed too high on the bank. The last thing I wanted was to dunk a foot or two in Allen Brook, which I could hear running under the snow. But I kept finding my way back to sawn trees, so I knew I was on the right path.

Finally I got to Allen’s slide, which offers great views back towards the Santanonis and Sewards, and I headed straight up. Since heading out on my own track, it had been back-breaking work, by this point there was 18″ of fresh snow. I just kept reassuring myself that I had nothing else to do that day, while cursing that (masochistic) part of me that wished for this. Above the slide, the trail is easy to follow since the forest tight, but it is relentlessly steep. It’s always nice to reach Allen’s ridge; today is was bliss.

I reached the summit at noon. The views were terrific, but sadly by then the sun had melted some of the dusted snow and it wasn’t as pretty as it was just two hours earlier. It took me easily twice as long having to break the trail, and what an accomplishment it was. On the descent my uphill footsteps looked comical, each one a distinct snowshoe print 18″ deep. I corrected my few errant tracks, but my uphill path was almost perfect. I found the left turn that the trio in front of me missed, it was just at the start of their errant loop.

The way out was a slog, especially once I packed up the extra 15 pounds of overnight gear. I’ve rarely been happier to be done, but what an incredible hike I had just completed. 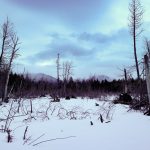 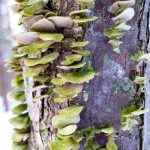 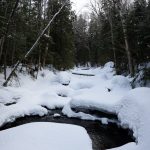 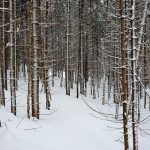 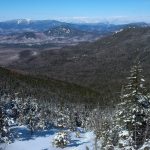 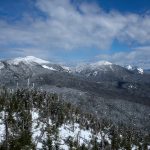 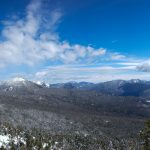 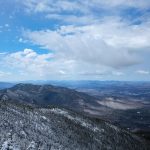