After climbing Mount Mansfield with the family and Abraham/Ellen/Killington on my own, we had one more day of hiking in mind, the very popular Camel’s Hump. We wisely opted for an early start, helped along by the weather (finally!) breaking. Temperature at the Burrows Trail trailhead was a perfect 59°F.

We originally scoped out a counter-clockwise loop, but changed our minds the night before and ascended the Burrows Trail instead. The early morning mist was lovely, and the trail was in great shape. The Burrows Trail was a consistent but not steep climb the whole way until it connected with the Long Trail 0.2 miles from the summit. A final push up the rocks and we enjoyed the cold and windy summit.

There were relatively few people on the summit when we arrived, and we chose a leeward ledge for snacks and a rest. The hordes of people showed up by the time we were done lingering.

We continued over the south side of the peak, staying on the Long Trail. It was steep; thankfully the steepest section at the top had very grippy rock, otherwise we might still be making our way down. We did get to see a peek at the Adirondacks in the distance.

The Long Trail continued through a number of steep scrambles. In hindsight, it might have been better to do the original counter-clockwise loop. Everyone was relieved to arrive at the Forest City Trail for the final 1.4 miles back to the car, which unlike some other reports I’d read was very easy the entire way to the parking lot.

Getting back to our cars, we enjoyed some RC and I had finished all five Vermont 4,000′ mountains. Maybe I’ll do the NE 111 now… 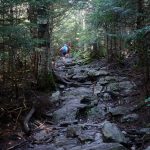 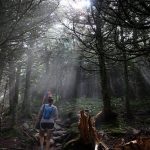 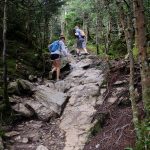 Long Trail on the north side of the summit 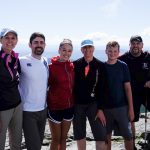 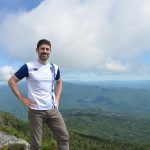 Me on Camel’s Hump 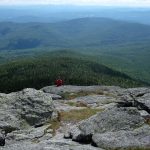 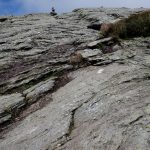 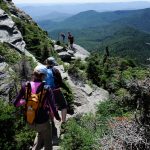