Earlier this August, Kathy and I completed a hike which was intimidating from its specs – 18 miles/5,000 vertical feet – tackling the upper end of the Great Range. Finishing Haystack, Basin, and Saddleback in under 11 hours – and feeling fresh – started me thinking about doing traverse from Lower Wolf Jaw to Haystack or Marcy, called a Great Range Traverse.

I had read (with awe) previous reports of GRTs, and like those who set speed records for hiking, always wondered exactly what it takes to complete one. The most common route covers 9 or 10 mountains – Rooster Comb, Hedgehog, Lower Wolf Jaw, Upper Wolf Jaw, Armstrong, Gothics, Saddleback, Basin, sometimes Haystack, and Mount Marcy. It can be 22-24 miles and upwards of 10,000 vertical feet of climbing.

My excellent support team (Kathy) and I drove up to Albany on Friday night, and woke for good at 4 AM Saturday morning. We were on the road by 4:45 AM, and I signed in to the Rooster Comb trailhead at 6:25 AM, destination: ‘Mount Marcy, exiting via the Loj.’

I love ascending, so my pace up to 2,788-foot Rooster Comb was steady and fast, arriving at the summit 2.5 miles from the register in just 50 minutes. I hunted for a cell signal without luck, snapped some photos from the nice overlook, and headed the half mile back to the trail up to Hedgehog Mountain. The climbing was steeper up to the nondescript Hedgehog, the trail and summit still forested and not too rocky.

From there the trail intersects the W.A White Trail up to the first 4,000-footer, Lower Wolf Jaw Mountain. This portion of the trail started the much more rocky and rough climbing which would last the rest of the day.

I summited Lower Wolf Jaw at 8:50 AM, still keeping about 2.5 mph overall. At the next summit, Upper Wolf Jaw, I stopped to eat my lunch (if you can call it that at 9:45 AM), and the 15 minutes I spent atop the ho-hum summit was the first break I took.

The leg from Upper Wolf Jaw to Armstrong passed at a good pace, almost as fast as the two seconds I spent at the summit. I remembered Armstrong as having a smaller overlook, so I didn’t realize until later that I had passed the actual peak.

From the Armstrong col it is a short 0.4 miles to Gothics, one of my favorite summits from 2012. I enjoyed the summit for 15 minutes, since even with an occasional cloud, 4,736-foot Gothics has a mighty view. Getting a cell signal at the top, I indicated to my support team (Kathy) that between my left knee, right foot, and right quad I was likely cutting out Marcy to make the hike ‘only’ 20 miles.

The descent off Gothics took me down the exposed and fun ‘cable route’, which was our way up in 2012. Ascending Saddleback, having to pause for a quad cramp to dissipate, I continued straight over and down the notorious cliffs. In two visits to Saddleback I’ve likely spent less than one minute on the actual summit.

Saddleback sits a good bit lower than its neighbors, so heading up to Basin is similarly steep to the descent from Gothics, and my quad let me know that my climbing for the day was done. I made the top of Basin at 1:00 PM, 6½ hours, 8 summits and 11.4 miles from my start.

Enjoying my last summit of the day for 25 minutes, my return to Keene Valley took me steeply down Basin and over the much-maligned Shorey’s Short Cut to Slant Rock. My average pace (including all my stops) had dropped to 1.6 mph by the time I intersected the Phelps Trail at Slant Rock. There I had visions of an ice cold Coca-cola and my support team (Kathy) meeting me, so I duly ignored my aches and pains and made the 3.3 miles from Slant Rock in 1 hour 15 minutes. My support team (Kathy) luckily found a spot in the tiny Garden parking lot and was a sight for tired eyes with about a mile and a half to go in the hike, helping me keep an almost identical pace to the car. I arrived at the lot – and the cold Coke – at 5:20 PM, just 10 hours and 50 minutes from the start.

In total, I hiked about 20.1 miles, gaining 7,200 vertical feet over 8 mountains. It wasn’t quite a full Great Range Traverse, missing the additional 1,400 vertical feet to Mount Marcy. I gained an appreciation for my abilities, and for the incredible abilities of the ultra-endurance hikers who do the full traverse. (Many do even more.) In the meantime, I got to hike some new trails and re-summit some of the most picturesque summits in the Adirondacks. It was a good day. 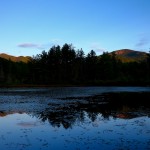 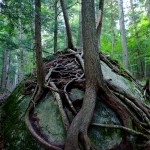 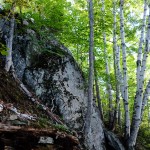 Huge boulders on the way to Rooster Comb 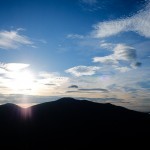 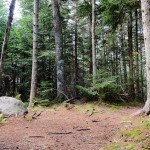 If I named a summit Hedgehog, this would be it. 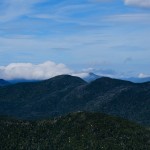 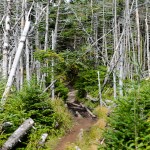 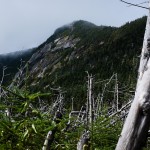 Gothics had its own cloud 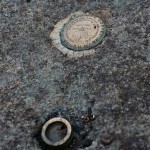 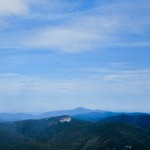 Big Slide and Whiteface from Gothics 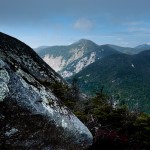 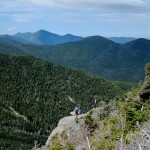 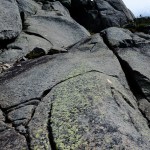 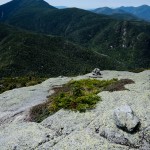 The last for me today — Basin Mountain’s summit