After a successful hike to Big Slide and with continuing cool temperatures and sunshine, I had hoped to take Kathy on a more wintry hike. We packed the snowshoes, hoped for a white fluffy trail and headed up two of the lower Great Range, Armstrong and Upper WolfJaw Mountains.

Starting from the Ausable Club lot, we turned up the Beaver Meadow Falls trail which starts at the eponymous birthday-cake waterfall. At about 3,000′ we switched into Hillsound Trail Crampons and a few hundred feet higher it was solidly snow and ice. I liked our prospects for actually using the snowshoes!

With the recent warm (hot?) weather and sunshine followed by the current cold snap, the snow was pockmarked with frozen footsteps. It softened as we navigated a somewhat tricky ridge line near the col, but thankfully the ladders near the top were open, not covered in ice.

The last 0.4 miles was acceptable snowshoeing, although the snow was still a bit of a minefield. I was hopeful we could keep the snowshoes on for the rest of the ridge hike. Like on Big Slide, we soaked up the sunshine and vistas from the summit, with no wind at all and clear skies.

Then things turned on us. The descent off Armstrong was all ice, forcing us out of the clumsy snowshoes. There were long, steep pitches with no recourse but to trust the Hillsounds and make a leap. Ladders were iced over, and in most places there were no alternative ways down.

It was slow (but safe!) going, and then Upper WolfJaw was exactly the same: acceptable on the way up, a river of ice on the steep descent.

After another slow descent in the worst conditions I’ve seen this winter, getting to the snowed-in WolfJaws Notch was a victory. The rest of the way was snow at the top, mud at the bottom, and an easy walk out of a hard day. 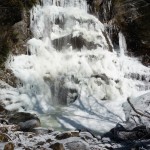 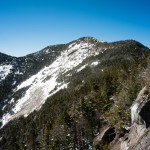 Gothics (right) and Pyramid (left) from the Armstrong/Gothics col

The Upper Great Range, Mt. Colden, and the Macintyres (L-R) from Armstrong 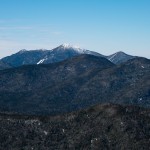 The MacIntyre Range: L-R Iroquois, Algonquin, and Wright, from Armstrong 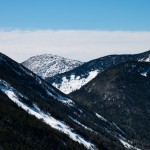 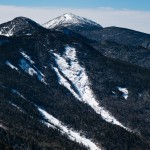 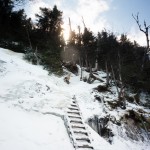 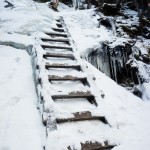 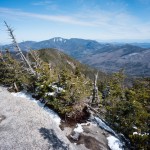 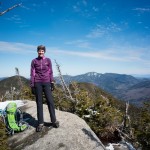 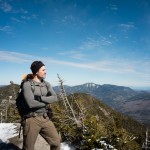 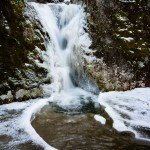