Exiting the Northway late Friday night, we realized that there was something strange about the grass on the side of the road. It was covered in snow.

The region was hit by its first snowstorm of the year, with a dusting in the valley but some significant accumulation at elevation. Unfortunately for our plans, the weather was both warming and forecast to rain, which I remembered from climbing Lower WolfJaw in February can be miserable.

Luckily it was dry when I parked; I was first in the lot at 7:15AM. You can see Sawteeth as you walk to the register, and I was relieved that it was out of the clouds. I got the usual warning from the warden, which to me is useless since he warns about everything, all the time.

Lake Road still had a dusting of snow, and turning up the Weld Trail I realized that I probably could have brought snowshoes. There was easily 4″-8″ of snow all the way up to the junction with Sawteeth, and there was 8″-12″ up to the summit. On the way I would get my only summit view of the day, looking back towards Pyramid, Gothics, and Saddleback. I could see the clouds rolling in.

Leaving Sawteeth and turning up to Pyramid Peak I started to get soaked. Not from rain, but from the aforementioned clouds permeating everything. My Gore-Tex was useless.

The normally lovely Pyramid Peak was completely socked in by the time I arrived. (Pyramid Peak is a 4,596-foot summit, although it sits too near Gothics to be one of the 46. It’s a heck of a mountain though.)

When I finally crested Gothics, not only was I sopping wet, but so too was the foot of snow-now-slush underfoot. The wind was as strong as any I’ve ever felt, making it a struggle to stay upright once out of the tree cover. Every step was essentially underwater, soaking my boots and rendering the traction useless. It was my shortest stay on Gothics ever, just enough to snap a single shot of the summit proper.

Armstrong was exactly the same, as was the descent down the Beaver Meadow Falls trail until about 2,300 feet where the snow abruptly vanished. By the time I got back to Lake Road it had completely cleared. I was still a sopping mess, and just chucked my pack in the car and cranked the heat. The hot shower I took was easily one of the best ever.

I passed a milestone with this hike: With Sawteeth and Gothics, I had hiked all 46 High Peaks in 2016! God, I love these mountains, even in conditions like these. 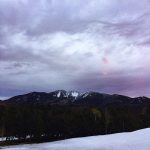 Giant Mt. across the Ausable Club 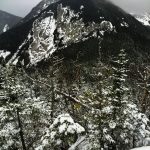