There are perfect days for hiking. This, unfortunately, was not one of them. In fact, it was the opposite of a perfect day for hiking.

Lower Wolf Jaw is normally done in conjunction with other peaks for at least a couple reasons. First, by the time you’re all the way up to the ‘Wolf Jaw Notch’ you’ve practically climbed nearby Upper Wolf Jaw. Second, the views per effort spent are miserly from Lower Wolf Jaw on its own.

So why did I climb ‘just’ Lower Wolf Jaw? Weather. There was a heavy rain moving in from the west (which nixed my plan to hike Seymour) and I needed/wanted to be done early.

I headed out to the Ausable Club parking area before dawn to a mix of snow and sleet. My most valuable piece of gear today was a baseball cap, stopping the sleet from pelting my face and run down my neck. Thankfully it wasn’t a strong storm (yet) and I got to somewhat enjoy a meandering West River Trail up to the Wedge Brook. This was the route we did in 2012 when we also added Upper Wolf Jaw and Armstrong.

At the turn for Wedge Brook there was more snow, so I shortly afterward donned my snowshoes. To those who haven’t used them, there is an amazing feature on mine: Heel lifters. They flip up under your heel and make an incline like you’re walking on flat ground — they’re amazing.

After the cutoff for state land it changed to snow, but was heavier than at the start. (It snowed enough to fully conceal my incoming track on the return.) Here the uncomfortable reality of the day started: In order to stay dry on the outside, I needed my jacket; in order to stay dry inside (sweating) I needed no jacket. Twice on the way up I stopped, flipped my jacket inside-out, and wiped the sweat off with a bandana. (Gross, I know.)

I made it to the summit, there were absolutely no views, and the wind was whipping across the ridge. I snacked a little, put on my dry gloves and a dry mid layer, and zipped back down where I came. The thought of overheating on the way to Upper Wolf Jaw (and my time constraint) made for an easy decision to head back. I changed back into Hillsound Trail Crampons at the West River Trail and after crossing Canyon Bridge the snow/sleet turned to rain. By the time I was back at the trailhead it was raining buckets. I was soaked.

While it isn’t normally done alone, I now have the luxury of doing the rest of the Lower Great Range (Upper Wolf Jaw, Armstrong, Gothics, and Sawteeth) without needing to go out-and-back to Lower Wolf Jaw. It also confirmed for me that, given how far I have to come to hike here, I’m going to keep being choosy with the weather. 33° and rain is about the worst weather I can imagine, so I’m glad that’s out of my system. (Meager pics of what I could get below.) 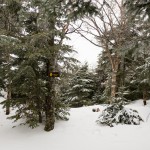 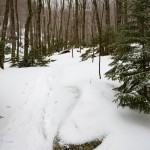 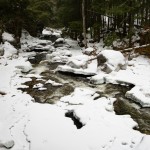 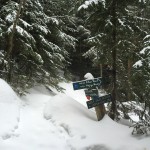