Vermont has 5 mountains above 4,000′ elevation, with 4,393′ Mount Mansfield as the highest. When viewed from the side, Mansfield roughly resembles an elongated head. Looking south-to-north, there is a bump for a forehead, then a sloping prominence to the tip of the nose, two small bumps along the ridge as the lips, and the high point on the rounded chin. While it isn’t exactly flattering naming, it does make for recognizable waypoints.

Our weather forecast called for hot, humid and afternoon thunderstorms, so we headed out as early as we could manage. As is typical of weather forecasts, we got doused twice on the early morning ascent and had clear skies the rest of the day.

We ascended the Haselton Trail to the Nose. The hardest part of the hike was finding the trailhead. We parked at the Long Trail lot at the Stowe Mountain Resort. The trailhead, which you can’t see from any of the parking lots and has no signage, starts around the back of the green building on the highest lot. Walking around the building there is a small sign in the woods on the left.

The Haselton Trail, excepting the two showers previously noted, was a nice forest trail. However, it isn’t exactly “wilderness” with the sounds of ATVs and zip lines echoing across the resort. Near the top the trail opens onto a ski trail and then terminates at the toll road next to the Stone Hut, a small stone cabin likely popular for skiing. The upper reach of the Haselton Trail is closed, so we walked the toll road to the base of the Nose and the caretaker building there.

Intended to offer a place to educate people about preserving the Alpine vegetation on Mansfield, the irony of the toll road leading to a caretaker building at the foot of giant radio towers was lost on the caretaker herself.

Picking up the Long Trail, we walked the rocky ridge line over the upper and lower “lips” and made the final push to the summit proper. There were a dozen or so people on the rocky summit and a welcome breeze to cut through the humidity.

We continued on the Long Trail planning to descend it back to our car. Coming off the summit was steep and rocky, but manageable by all. The kids and I took a jaunt up to the Adams Apple while the rest headed down. The upper reaches of the Long Trail were rocky, and unlike much of the Adirondack rock, was a bit slippery even when dry.

At about 3,000′ elevation the Long Trail skirts next to one of the ski slopes, which we decided would make a quicker descent than the rocky Long Trail. Me, Tom, and the kids ran down the slope like giggling schoolkids, with Kathy and Linay cursing us the whole way. It eventually returned us to the start of the Haselton Trail and some cold RC Colas waiting for us in the car. We topped off the hike with a visit to the Alchemist Brewery in Stowe. 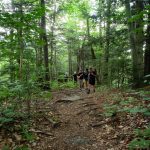 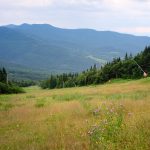 Upper end of the Haselton Trail 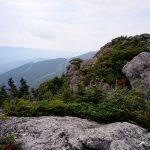 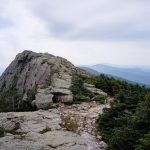 Looking back on one of the ‘lips’ 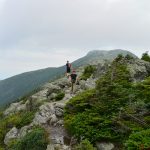 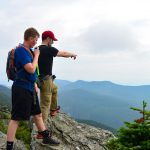 Me pointing to our car 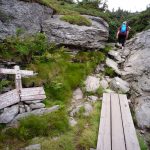 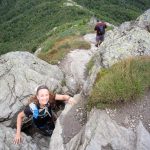 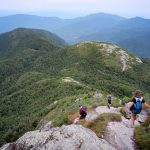