After completing two days of hiking from the Adirondack Loj, I set off for Tahawus, near Newcomb, and Allen Mountain. I drove the scenic way through Saranac Lake, Tupper Lake, and Long Lake; given the traffic and bridge construction in Keene Valley this was smarter than taking the Northway.

The heat and humidity finally broke, and I was overjoyed at having chilly hands leaving even at the late 9 AM hour. As my third trip to Allen, I knew to expect a long, varying trail that back-ends most of the climbing. It was nice to not overheat on the flats.

I motored past Lakes Jimmy and Sally, took a few interesting snapshots of some of the scenery, but generally just kept my head down and walked. The water was low enough that I rock-hopped across the Opalescent River, rather than wading across like we did our first time through. On the return there, I met a girl with a chainsaw: Not as in a horror movie; she was helping to build a new bridge replacing the one swept away by ice in 2008!

The route alternates between trails and old logging roads until it turns in near the Lower Twin Brook and heads for Allen Brook. The trail then essentially follows the brook just about to the summit. I’ve read various theories on what causes it, but the exposed slabs on this route (and there are many) are slippery, making footing more cautious than usual. I wondered if it may be, like the second-worst plague on Washington D.C., some sort of biofilm.

The summit was nice, with a cooling breeze and wide vistas from little side trails. From the summit north you look towards Marcy and Skylight [which Reni, whom I met the day before at the Loj, had hiked earlier in the day along with Gray and Colden] and also to Gothics, Sawteeth, Giant, Rocky Peak, and the Colvin and Dix ranges. A small lookout just shy of the summit looks westward over Mt. Adams to the Santanonis. That’s a benefit of a high peak in the middle of nowhere.

I met a brand new 46er in a group on my way up, and passed them again on the return. Like on the way in, I put my head down and walked. For four hours. Allen really is a stamina test, more mental than physical. If you recognize the many landmarks along the way it helps pass the time, as did a couple albums by Leonard Cohen and Built to Spill. I rarely listen to music while hiking, but I really enjoyed it on this hike.

As I was nearing the Hudson and the parking lot, I realized a quirky fact about my trip. Since I started late on Saturday, it had been 51 hours and I had hiked 51 miles. (With 14,000 vertical feet of climbing.) I had taken a huge chunk out of my August grid, having hiked 15 peaks this month and bringing my total (for August hikes) to 45 out of 46. Next year, I’ll hike Nippletop and be finished with the month! 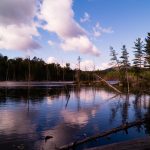 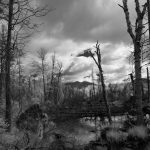 Popple Hill from the trail to Allen 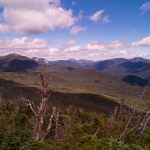