After our successful 10-high peak trip in August, Kathy and I couldn’t wait to get back to the Adirondacks. Literally.

So we went back.

It rained – hard – the night before we arrived, so as we pulled into the parking area, the Roaring Brook was more like a deafening one. The only car in the lot, we signed into the trail at 7:44 AM.

Having already climbed Giant Mountain via the steeper trail farther down Route 73, the Roaring Brook trail was a nice soft start. That lasted about a mile until – and for the rest of the hike to Giant – we were marching in the middle of a flowing stream. You could see the water cutoffs simply being overwhelmed by new sources entering at every turn.

This is why they invented Gore-Tex shoes, and we made it to Giant Mountain’s peak in about 2.5 hours including photo time. Giant’s peak was engulfed in clouds, as it stayed for our entire hike, but thankfully it didn’t rain. Giant was our second high peak, completed on a sunny day in 2009, so we didn’t mind sitting and enjoying the tranquility of a solitary, clouded peak.

Heading back the 0.1 miles to the junction, we had 1.2 miles to Rocky Peak Ridge. The way down from Giant was steep, and like the other side, wet. The descent had a number of bare rock faces, none too high but most big enough to hurt if we fell, making it slow going.

When we got to the col, Rocky Peak Ridge rose gently compared to the straight-up view behind us. Before noon we were enjoying lunch on our 15th high peak, again solitary but this time low enough to be out of the clouds. In fact, it was intermittently sunny on Rocky Peak Ridge, and you could see the higher Giant and Dix engulfed in clouds.

Returning back over Giant, we saw the only other hikers of the day at the junction 0.7 miles from the top. They had come the steeper route, and one of them asked, “how much time is left – 5 minutes?” Kathy and I were sure that they would turn around when we let them know that they were probably 40 minutes from the peak, but they kept on. We were back at our car by 4:30 PM, warmed up and ready for another day of hiking. 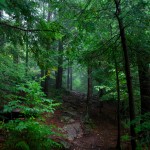 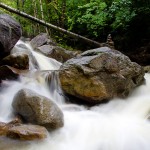 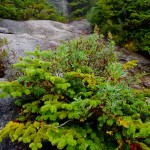 One of the few dry areas on the way to Giant 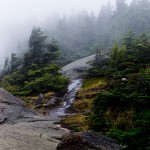 In the clouds on Giant Mountain’s peak 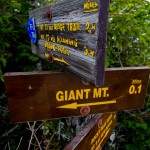 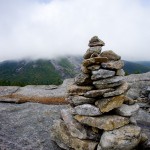 Rocky Peak Ridge’s summit, with Giant in the background 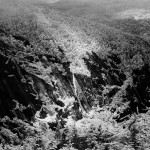 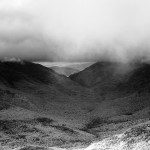 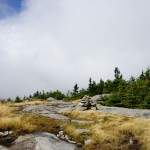