After months of hot and many times humid breezeless hiking, the overnight low dipped into the low 40s, and it was 43°F when Kathy dropped me off at 5 AM. Yes, it’s still dark. I predicted the early starting time had me exiting around 1:30 PM, in time to clean up and have a relaxing dinner. Given that there was only one parking spot left at that early hour told me it was going to be a busy day in the High Peaks, another reason to get out before the rabble.

The Johns Brook Lodge was beginning to stir when I passed it at 6 AM, I could smell the bacon cooking as I passed onto ADK property. I popped in to briefly say ‘hi’ before keeping on my way.

It had rained the day before, but the Phelps trail was fairly dry. It’s not my favorite section of trail, but was in okay shape up to Slant Rock. (This photo from adk46.wordpress.com shows why it’s called Slant Rock!) After a rain the close-in evergreens act like a car wash, so luckily I wore gloves and long sleeves to stay mostly dry.

I turned up Shorey’s Shortcut, which I last did in complete darkness after a long day. Given how excruciating it was that day, it was nice to handle it while fresh. The ‘shortcut’ really isn’t shorter to anything, but allows for a loop of Basin and Saddleback and has spectacular views both to the north and south as you crest over the high point. I couldn’t resist some photos before heading to the Range Trail and 26 minutes after that, Basin’s summit.

I’ve bailed out of Basin (and Saddleback) twice after exceedingly long days. The morning views brought back what I was missing. The 4,827-foot summit (9th highest in the Adirondacks) has an open, rocky summit with nearly 360° views dominated by the close-up of Mount Haystack. The summit offers views from Dix and Nippletop to the East, to Haystack, Skylight, and Marcy to the south, the MacIntyres and around to Whiteface and Big Slide to the west. You can work your way around to the west side of the summit and get views back the the lower Great Range to the northeast.

The fog was still settled in the valleys, with the beautiful low morning light yet to clear it out. It was sublime.

From there it’s a steep drop into the col where Saddleback rises from the trees, ringed by open rock, its (in)famous “cliffs”. From the base of the cliffs, the paint blazes seem to show a path up vertical rock, but if you follow the path it’s surprisingly straightforward. It was far easier this time than our first, in the middle of a roaring thunderstorm!

Saddleback’s summit is nice, with 180° views dominated by Basin and its slides. I arrived at the same time as three gentlemen who I overheard say “wait a minute — this isn’t Gothics!”

It was 9:00 AM, and I figured the crowds were starting to arrive. As I descended Ore Bed, my prediction proved correct, passing at least 10 groups and about 25-30 people. Given how beautiful the day was I figured this was the start of the deluge. Luckily for me, I was in much better shape than expected and signed out in 6 hours and 54 minutes, easily beating my expectations. So too did this amazing hike and these beautiful mountains. 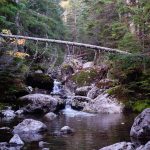 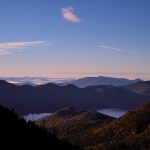 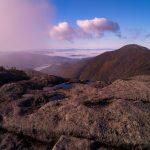 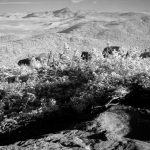 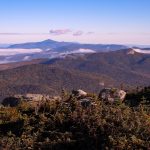 Whiteface (back) and Big Slide (fore) from Basin Mt. 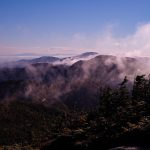 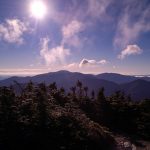 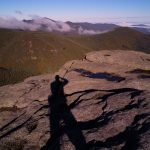 SP on Basin, MacIntyres in the clouds 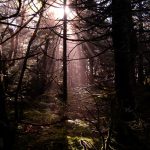 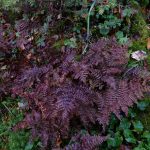 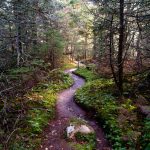 Col between Basin and Saddleback 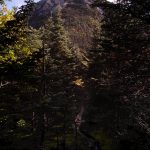 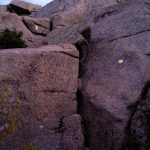