In finishing the Adirondack 46 High Peaks a second time, I had a few of the more remote peaks to tackle. I had considered attempting Allen Mountain instead, but the planning (read: breakfast in Keene Valley) dictated this pair instead.

Cliff Mountain and Mt. Redfield have two typical approaches: One from the south via Upper Works and one from the North via the Adirondack Loj. The hike from the south is slightly longer, while from the north there is slightly more vertical gain. Like our summertime hike up these two, I chose the out-and-back from the Loj over Lake Arnold.

The morning was cold, about 5°F, but there was little wind and lots of sunshine. I made it to Marcy Dam in bare boots over the hard-packed snow, where I changed into snowshoes for the remainder of the hike.

The climb up to Lake Arnold was pleasant, almost fully snow-covered up to the Indian Falls junction, and a smooth path above 3,500′. Since the route climbs a stream bed filled with boulders, the straight path through the snow was a welcome change from summertime’s boulder-hopping. The descent from Lake Arnold was speedy, and the beaver bogs across the Opalescent River were frozen solid — again, much nicer than in summer.

The junction to Cliff and Redfield is just across from the Uphill lean-to, about 6.8 miles from the start of my hike. I turned to climb the lower Cliff Mountain first, along a route which in the summer turns into a muddy bog.

There wasn’t any mud this time, but there were a few trees down and some icy steep pitches making the going rough and slow. I tried my best to flatten out a path for my return, and did stop to enjoy the few lookouts near Cliff’s false summit.

The climb up Redfield was fairly straightforward, and in better shape than Cliff, but by the top my climbing muscles were spent. I had also managed to break both snow baskets off my hiking poles, making the descent a pain — literally. This was also when some annoying low clouds settled over the high peaks making the views hazy, ruining my photo opportunities for the rest of the day.

I toughed out the return trip without incident, although I went much slower than normal due to the lack of effective hiking poles. It got dark just as I got to the final junction, 0.9 miles from the register, and my headlamp led me the rest of the way. It was harder than I expected, but having seen no other hikers all day on a mostly beautiful day made for a rewarding finish. The pulled pork served over mac & cheese from the ADK Cafe was to die for! 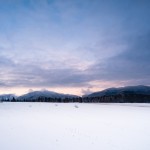 View of Algonquin from North Meadows 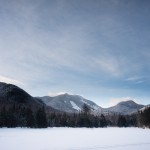 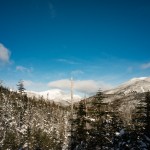 Snowy Algonquin from the herd path to Cliff Mountain 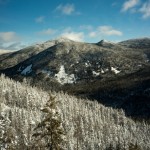 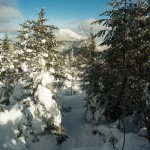 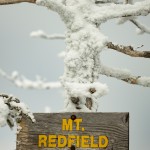 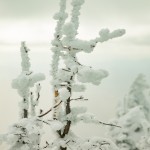 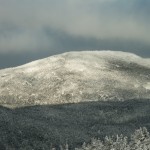 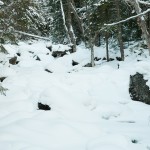 PS – For those interested, I have 6 summits left to complete my second round of 46: Gray Peak, Allen Mountain, and the four Sewards.