Needing a short hike which I could fit in after work but before sundown, these two peaks offered me a good option. From the register on Route 73, it is only 4.6 miles (round trip) to Cascade, with an additional 1.5 mile out-and-back to Porter Mountain.

Cascade was our first high peak, way back in 2009. Back then, the three quarters of a mile to Porter might as well have been a million; we were exhausted within a mile of the car. We re-did Cascade and added Porter back in 2011, which was the last time I was on Cascade. (Since then I’ve summited Porter via different routes twice.)

Compared to the snow pack I encountered going to Colvin, Blake, Nippletop and Dial, this hike was dry. Actually, this hike was ice, with the lower 1.5 miles mostly flowing ice, some with a dusting of snow. The Hillsound Trail Crampons (which slip over your shoe/boot and have steel teeth for ice) made short work of the soft ice, avoiding rocks the most difficult part.

Once on the ridge, it got colder and there was decent snow pack. This packed snow, while possible for snowshoes, was also fine for the Hillsounds without sinking with every step.

Cascade’s summit was wind-blown and mostly bare rock. There were clouds lingering around the higher peaks, but lower ones like Big Slide were lovely. Cascade is known for its wide open vistas, and even on a cloudy day offers something.

Porter was pretty, a veritable winter wonderland on the windward side, with trees covered in snow and ice. Just before the summit there is a giant boulder which offers a great view towards Big Slide.

I made it out and back from the parking area in exactly 3 hours. Compare that to our start in 2009, and you can see how far I’ve come. Today was a good day! 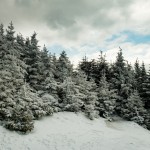 A clearing on the way to Cascade 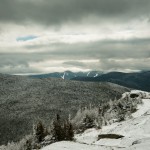 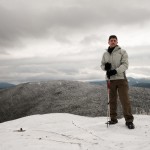 Atop Cascade, with Porter Mt. in the background 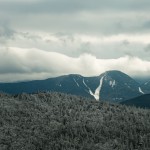 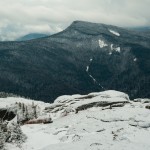 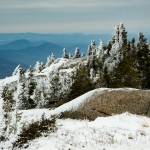 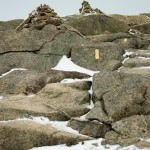 The last scramble to Cascade’s summit 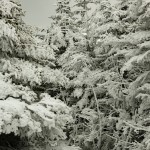 Snow-covered trees on the way to Porter Mountain 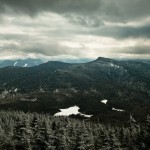